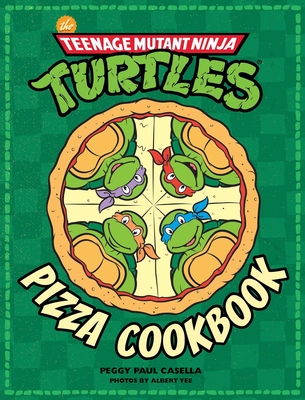 
Usually Arrives in Store in 1-5 Days
Host the ultimate pizza party with this creative cookbook of delicious recipes inspired by the heroes of the Teenage Mutant Ninja Turtles.

Straight out of the sewers and right into the kitchen, the Teenage Mutant Ninja Turtles' favorite pizzas are finally yours to create and enjoy! Join Leonardo, Raphael, Donatello, and Michelangelo on a seriously ooey, gooey, cheesy, adventure inspired by the beloved original cartoon series.

This cookbook contains sixty-five righteous recipes, from old-school classic such the New York Style Pepperoni to newfangled feasts such as the Lean, Mean, and Green and Shredder's Revenge. There's a pizza for every occasion -- breakfast pizzas, mini-pizzas, party pizzas, and even dessert pizzas. So get on the ninja diet and be prepared to eat your hearts out! Cowabunga!

© 2017 Viacom International Inc. and Viacom Overseas Holdings C.V.  All rights reserved.  Nickelodeon, Teenage Mutant Ninja Turtles, and all related titles, logos, and characters are trademarks of Viacom International Inc. and Viacom Overseas Holdings C.V. Based on the characters created by Peter Laird and Kevin Eastman.
Author bio: Peggy Paul Casella is a cookbook writer and editor and the creator of ThursdayNightPizza.com, a food blog centered on making weekly pizzas from scratch. In her editing/writing life, she wrangles hundreds—sometimes thousands—of recipes each month from chefs, writers, and publishers all over the country; writes a regular column on seasonal produce for a local Philadelphia magazine; and contributes sporadically to other publications. Peggy started Thursday Night Pizza in 2014 as a way to play with seasonal ingredients and test out all sorts of weird and wonderful flavor combinations, mad scientist style. She grew up watching the original Teenage Mutant Ninja cartoon and considers Michelangelo a true pizza visionary.

Photographer/Illustrator bio: Albert Yee is a professional photographer and devoted lover of food, particularly pizza. Upon moving from New York to his adopted home of Philadelphia, he promptly went on a frenzied taste test of twenty or so pizza shops to find a new "home slice" to enjoy. When not eating a slice, he can be found photographing some part of the Mid-Atlantic region's food economy, whether it be on a farm, at a restaurant, or in a market. He now lives blocks away from the nation's first and only pizza museum and what many have come to consider the country's best pizza pie.