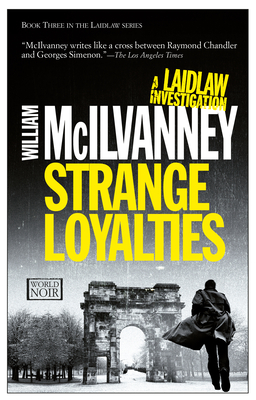 This is book number 3 in the Laidlaw Trilogy series.

From William McIlvanney, “the father of 'Tartan Noir’,” comes the third book in the groundbreaking Laidlaw series, one that explores “the ruin of the body, the corruption of the soul and the shattering of society” (Wall Street Journal).

This third book in the series begins with Jack Laidlaw’s despair and anger at his brother’s death in a banal road accident. But his nagging doubts about the dynamics of his brother’s death lead to larger questions about the nature of pain and injustice and the greater meaning of his own life. He becomes convinced there is more to his brother's death. His investigations will lead to a confrontation with his own past and a harrowing journey into the dark Glasgow underworld.

The Laidlaw books are widely considered to be among the greatest achievements of Scottish crime writing and the founding novels of what has since become known as the school of Tartan Noir, whcih includes autors like Val McDermid, Denise Mina, and Ian Rankin.
William McIlvanney is widely credited as the founder the Tartan Noir movement that includes authors such as Denise Mina, Ian Banks, and Val McDermid, all of whom cite him as an influence and inspiration. McIlvanney's Laidlaw trilogy “changed the face of Scottish fiction” (The Times of London), his Docherty won the Whitbread Award for Fiction, and his Laidlaw and The Papers of Tony Veitch both gained Silver Daggers from the Crime Writers’ Association. Strange Loyalties won the Glasgow Herald’s People’s Prize.
Praise for Strange Loyalties

“This extraordinary and beautifully written novel…sets a high standard among contemporary thrillers. Like its detective hero, Strange Loyalties is captivating and unforgettable.”—Publishers Weekly

“Starts on the streets and ends up in the soul.”—The Daily Telegraph

“A grimly effective novel like Chandler’s The Long Goodbye about the detective’s loyalty to the dead.”—Kirkus Reviews

Praise for William McIlvanney and his Laidlaw Trilogy

“From the opening chapter of Laidlaw, I knew I’d never read a crime novel like this.”—Val McDermid, author of The Mermaids Singing

“It's doubtful I would be a crime writer without the influence of McIlvanney's Laidlaw.”—Ian Rankin, author of Rather be the Devil

“Fastest, first and best, Laidlaw is the melancholy heir to Marlowe. Reads like a breathless scalpel cut through the bloody heart of a city.”—Denise Mina, author of Garnethill

“Laidlaw is a tough novel, with an exciting ending, and it is superbly written. You should not miss this one.”—The New York Times

“It is great entertainment, but McIlvanney’s achievement is to transcend the conventions of the crime novel even while he observes them. The trilogy is one of the finest things in modern fiction, in the Chandler and Simenon class.”—Spectator

“A classic of the genre…If you only read one crime novel this year, this should be it.”—Guardian

“The finest Scottish novelist of our time.”—Telegraph

“Allan Guthrie probably comes closest to McIlvanney in his mix of humor and compassion, but even that top-flight crime writer doesn’t do it with the same concentration.”— Peter Rozovsky, Detectives Beyond Borders

“The Laidlaw books are not just great crime novels, they are important ones. McIlvanney proved that crime writing could have both perfect style and huge ambition. Most of us writing crime fiction today are standing on the shoulders of giants. McIlvanney is one such giant.”—Mark Billingham, author of Sleepyhead

“Laidlaw is a rebuke against the triteness of moral certainty, an evangelist of the sanctity of doubt and a preacher on the necessity of love.”—The Herald, Scotland

“McIlvanney is the razor king of Scottish crime writing, carving out crackling prose and pounding storylines. His Laidlaw is an enduring hero with the dry wit and insight to make other literary detectives seem two-dimensional.”
—Gordon Ferris, author of the Douglas Brodie series

“The Laidlaw books are like fine malt whisky—the pure distilled essence of Scottish crime writing.”—Peter May, author of the Lewis trilogy

“William McIlvanney paints a world of harsh reality, but does so in language that is strangely beautiful and hauntingly poetic. His work defies pigeonholing in any genre: this is simply great writing from a master of his craft.”—Craig Russell, author of the Jan Fabel series

“I have seldom been so seized by a style, or so taken by a character as I was by the angry and compassionate Glasgow detective, Laidlaw…McIlvanney has broken new ground, and is to be congratulated on his talent and his daring.”—Ross McDonald, author of the Lew Archer series

“McIlvanney’s prose is simultaneously sparse and lyrical. Short sentences, paragraphs and, indeed, chapters give the feel of a thriller to some beautiful writing.”—Killing Time Crime

“A crime trilogy so searing it will burn forever into your memory. McIlvanney is the original Scottish criminal mastermind.”—Christopher Brookmyre, author of When the Devil Drives