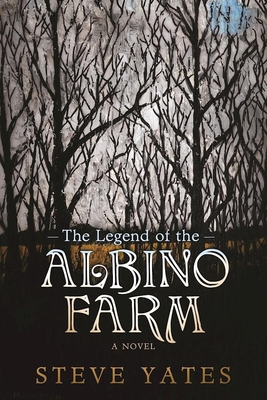 Steve Yates has crafted a wonderful, suspenseful tale that will haunt and mesmerize its readers. The Sheehys are a grand old family from the Missouri Ozarks whose estate has fallen on tough times and become the source of local legend. Hetienne Sheehy is due to inherit the place but she has long suffered visions of terrible foreboding regarding her future there. As her story is told and her premonitions come true, the fragility of the human psyche and the power of myth to rule our lives is revealed. Like William Gay and Daniel Woodrell, Yates mines the fertile ground of his home state and constructs a world that the reader will not soon forget.

The Legend of the Albino Farm is a horror story turned inside out. What if a thriving family were saddled with an unshakable spook tale? And what if that lore cursed them with an unending whirlwind of destruction from thrill seekers, partiers, bikers, and Goths? Hettienne Sheehy is about to inherit this devouring legacy. Last child to bear a once golden name, she is heiress to a sprawling farm in the Missouri Ozarks. During summer, childhood idylls in the late 1940s, Hettienne has foreseen all this apocalyptic fury in frightening, mystifying visions. Haunted by a whirling augury, by a hurtful spook tale, and by a property that seems to doom all who would dare own it, in the end, Hettienne will risk everything to save the family she truly loves. The Legend of the Albino Farm has haunted two generations of Sheehys and marred all memory of the family's glory days. Worse, this spooky lore now draws revelers, druggies, motorcycle gangs, hippies, and later Goths to trample the land, set bonfires, and vandalize its structures, all while Hettienne's aged aunts cling to privacy, sanity, and a rapidly deteriorating thirteen-room mansion.. From her youth, throughout her marriage and her rearing of her children, the Legend of the Albino Farm and the curse of the Sheehys drag at her and her family like a vortex. Haunted by a whirling augury, by a hurtful spook tale, and by a relentlessly judgmental Ozarks city, in the end, Hettienne believes she must make decisions that might compromise her family's financial security but will severe them from an ever more dangerous legacy.

Steve Yates is the author of the Knickerbocker Prize-winning Sandy and Wayne: A Novella, the Juniper Prize-winning Some Kinds of Love: Stories, and the novels and its sequel The Teeth of the Souls. The recipient of three individual artist fellowships from the Mississippi Arts Commission and another from the Arkansas Arts Council, he lives in Flowood, MS. Born and raised in Springfield MO (the setting for this novel) Yates is the associate director and the marketing director at University Press of Mississippi.