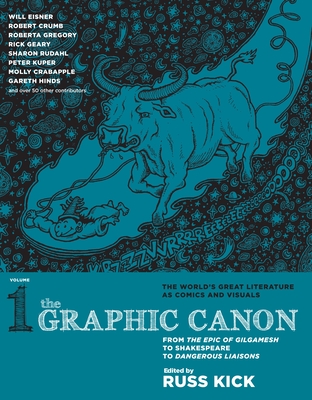 THE GRAPHIC CANON (Seven Stories Press) is a gorgeous, one-of-a-kind trilogy that brings classic literatures of the world together with legendary graphic artists and illustrators. There are more than 130 illustrators represented and 190 literary works over three volumes—many newly commissioned, some hard to find—reinterpreted here for readers and collectors of all ages.

Volume 1 takes us on a visual tour from the earliest literature through the end of the 1700s. Along the way, we're treated to eye-popping renditions of the human race's greatest epics: Gilgamesh, The Iliad, The Odyssey (in watercolors by Gareth Hinds), The Aeneid, Beowulf, and The Arabian Nights, plus later epics The Divine Comedy and The Canterbury Tales (both by legendary illustrator and graphic designer Seymour Chwast), Paradise Lost, and Le Morte D'Arthur. Two of ancient Greece's greatest plays are adapted—the tragedy Medea by Euripides and Tania Schrag’s uninhibited rendering of the very bawdy comedy Lysistrata by Aristophanes (the text of which is still censored in many textbooks). Also included is Robert Crumb’s rarely-seen adaptation of James Boswell’s London Journal, filled with philosophical debate and lowbrow debauchery.

Religious literature is well-covered and well-illustrated, with the Books of Daniel and Esther from the Old Testament, Rick Geary’s awe-inspiring new rendition of the Book of Revelation from the New Testament, the Tao te Ching, Rumi’s Sufi poetry, Hinduism’s Mahabharata, and the Mayan holy book Popol Vuh, illustrated by Roberta Gregory. The Eastern canon gets its due, with The Tale of Genji (the world’s first novel, done in full-page illustrations reminiscent of Aubrey Beardsley), three poems from China’s golden age of literature lovingly drawn by pioneering underground comics artist Sharon Rudahl, the Tibetan Book of the Dead, a Japanese Noh play, and other works from Asia.

Two of Shakespeare’s greatest plays (King Lear and A Midsummer Night’s Dream) and two of his sonnets are here, as are Plato’s Symposium, Gulliver’s Travels, Candide, A Vindication of the Rights of Woman, Renaissance poetry of love and desire, and Don Quixote visualized by the legendary Will Eisner.

Some unexpected twists in this volume include a Native American folktale, an Incan play, Sappho’s poetic fragments, bawdy essays by Benjamin Franklin, the love letters of Abelard and Heloise, and the decadent French classic Dangerous Liaisons, as illustrated by Molly
Crabapple.


Edited by Russ Kick, The Graphic Canon is an extraordinary collection that will continue with Volume 2: "Kubla Khan" to the Bronte Sisters to The Picture of Dorian Gray in Summer 2012, and Volume 3: From Heart of Darkness to Hemingway to Infinite Jest in Fall 2012. A boxed set of all three volumes will also be published in Fall 2012.

Founder of the website The Memory Hole, which archived sensitive and difficult to find official documents, RUSS KICK has devoted much of his life to digging up what others hope to keep buried. His bestselling anthologies, including You Are Being Lied To and Everything You Know Is Wrong, have sold over half a million copies. The New York Times has dubbed Kick "an information archaeologist," Details magazine described Kick as “a Renaissance man,” and Utne Reader named him one of its “50 Visionaries Who Are Changing Your World.” Russ Kick lives and works in Nashville, Tennessee, and Tucson, Arizona.

“Through the reprinted and newly-produced work of 59 (mainly American) adapters and 58 adapted titles, this is not only a survey of the world’s diverse artistic past, but also a breathtaking glimpse of this young medium’s incredible future.” —Booklist

“The graphic publishing literary event of the year.” —Publishers Weekly

“This meaty slab is laced with more wit, beauty, social commentary and shock than one might expect. . . If artists, as British sculptor Anish Kapoor famously said, make mythologies, then this volume is genuinely a marriage of equals.” —Kirkus Reviews

“The Graphic Canon is absolutely the most ambitious book I've picked up this year.” —Newsday

“The Western literary canon has long been debated and criticized by academics, and rightly so. Which books belong and which don't? Now The Graphic Canon, a three-volume series edited by Russ Kick which presents classic lit as comic strips, adds a bit more fuel to the intellectual fires.” —Steven Heller, The Atlantic

“These are 500 pages that contain more intelligence, wit, and savvy social commentary than anything else I have read in a long time. It is an amazing work. It is wild. It is dirty at times. It is nothing short of beautiful.” —New Straits Times

“The diversity and excellence of this volume is just about overwhelming.” —The Austin Chronicle

“Looks like a must-buy for all academic libraries, many public libraries, and many high schools, and an exciting new benchmark for comics!" —Martha Cornog, Library Journal

"This is a masterpiece of literary choices as well as art and interpretation. It is a perfect graduation or summer-reading present, and the solid editing, including introductory notes for each piece, makes it a required purchase for any library." —School Library Journal

“It takes time to read this book, but it is a book worth taking time over [...] Robert Berry and Josh Levitas’ adaptation of Shakespeare’s eighteenth sonnet is among the best of the lot. They succeed, not only in doing justice to the original poem, but also, with the illustrations, in adding a kind of meditative short story reflective of the emotion the sonnet conveys.” —The Comics Journal

"This series is the mother lode of beautifully illustrated and refreshingly adapted classics, featuring stories from throughout the globe and human history. The Epic of Gilgamesh, Beowulf, The Tale of Genji, Candide… the list of tales is as staggering as the list of contributing artists, who include Will Eisner, Robert Crumb, Milton Knight and Molly Crabapple. And it’s not just the far past that’s brought to these pages; you’ll also find the poetry of Langston Hughes, Marquez’s dreamlike epic One-Hundred Years of Solitude, and David Foster Wallace’s Infinite Jest here. It’s a veritable library made into a series of elegant artworks, and perhaps the ultimate example of the capabilities of the humble comic book." —IGN