A Spy in Canaan: How the FBI Used a Famous Photographer to Infiltrate the Civil Rights Movement (Hardcover) 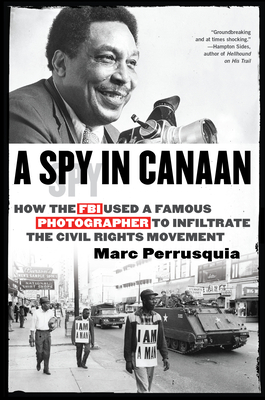 A Spy in Canaan: How the FBI Used a Famous Photographer to Infiltrate the Civil Rights Movement (Hardcover)


Email or call for price.
Only Ernest Withers, a key figure in the civil rights movement, could have delivered such iconic photographs—and the kind of information the FBI wanted . . .

Renowned photographer Ernest Withers captured some of the most stunning moments of the civil rights era—from the age-defining snapshot of Dr. Martin Luther King, Jr., riding one of the first integrated buses in Montegomery, to the haunting photo of Emmett Till’s great-uncle pointing an accusing finger at his nephew’s killers. He was trusted and beloved by King’s inner circle, and had a front row seat to history . . . but few people know that Withers was also an informant for the FBI.

Memphis journalist Marc Perrusquia broke the story of Withers’s secret life after a long investigation culminating in a landmark lawsuit against the government to release hundreds of once-classified FBI documents. Those files confirmed that, from 1958 to 1976, Withers helped the Bureau monitor pillars of the movement including Dr. Martin Luther King and others, as well as dozens of civil rights foot soldiers.

Now, on the fiftieth anniversary of King’s assasination, A Spy in Canaan explores the life, complex motivations, and legacy of this fascinating figure Ernest Withers, as well as the dark shadow that era’s culture of surveillance has cast on our own time.


Includes an 8-page, black-and-white photo insert.
Marc Perrusquia is a journalist for The Commercial Appeal, the daily newspaper in Memphis, Tennessee, where he has worked the past twenty-nine years. He has won numerous national awards for both feature writing and investigative reporting.
"Fascinating....[Perrusquia] tells part of the story that only he can—the discovery of Withers’s secret and the struggle to bring it to light—and his contact with Lawrence’s surviving family members makes for insights into the FBI agent’s own personality and motivations."—Clifford Thompson, Wall Street Journal

"A smart journalist’s book, crisply marching through Withers’s F.B.I. records and the paper’s battle to pry them out of the government’s grip."—Christopher Bonanos, New York Times Book Review

“A Spy in Canaan is a reporter’s account filled with dramatic scenes, sharply etched characters and insights into FBI political surveillance, the civil rights movement and the journalistic process. . . . As A Spy in Canaan adeptly shows, history is not always so clear-cut."—Seth Rosenfeld, San Francisco Chronicle

"A triumph of investigative reporting, the product of the author’s dogged research. . . . A Spy in Canaan brims with new details about the inner workings of the movement in Memphis and beyond."—Aram Goudsouzian, The Washington Post

"A meticulously documented, finely written account of Withers’ life. . . . Even more important, it is a damning portrait of FBI tactics in an era marked by intense social upheaval."—Pamela Miller, The Minneapolis Star-Tribune

“As everyone from Memphis knows, Marc Perrusquia is an indefatigable sleuth who has done much to tease out the most important stories from our city’s intriguing and tragic past. In this ground-breaking and at times shocking examination into the conflicted life of a towering civil rights-era figure, we are reminded that the truth is often far more complicated than we could ever imagine.” —Hampton Sides, author of Hellhound on His Trail

“A Spy in Canaan is an important contribution to the history of the civil rights movement of the 1960s and 1970s, and the role of the FBI in monitoring and attempting to contain activists challenging the racial status quo in the Memphis area. Perrusquia’s sobering tale provides a context for understanding the contemporary debate over race and social justice.”—Athan Theoharis, author of Spying on Americans: Political Surveillance from Hoover to the Huston Plan