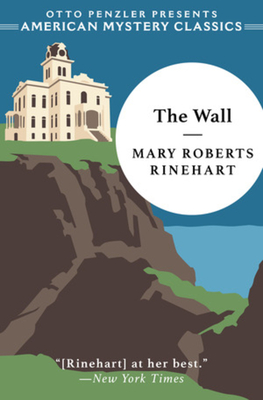 Marcia Lloyd and her brother Arthur have spent every summer of their lives exploring the grand halls and seaside grounds of their family’s idyllic vacation home, a gorgeous old mansion called Sunset House built by their grandfather. But when Arthur’s ex-wife Juliette arrives at Sunset to demand alimony from him, things take a dark turn and Juliette disappears—her body found a week later. What sordid secrets lie within the creaky old manor? Marcia and the local sheriff Russell Shand must work against the clock to find the murderer in this seemingly utopian upper-class hamlet.

From “the American Agatha Christie” Mary Roberts Rinehart comes a Golden Age murder mystery inspired by her own hauntingly beautiful coastal northeastern home in Bar Harbor; The Wall is both a love letter to quiet waterfront towns as well as a subtle indictment of a wealthy Old New York family attempting to preserve a bourgeois veneer in the shadow of the Great Depression. But beneath all that lies a timeless tale of a family whose conflicts and passions, long masked by efforts toward respectability, finally rise to the surface with violent results.

Originally serialized in The Saturday Evening Post and published in 1938, this classic small-town cozy was among Rinehart’s most popular titles in her day; reprinted for the first time in over twenty years, its atmospheric setting and memorable characters continue to distinguish it to this day.

Includes discussion guide questions for use in book clubs.

Mary Roberts Rinehart (1876-1958) was the most beloved and best-selling mystery writer in America in the first half of the twentieth century. Born in Pittsburgh to the owner of a sewing machine factory, she wrote fiction in her spare time until a stock market crash sent her and her husband into debt, forcing her to lean on her writing to pay the bills. Her first two novels, The Circular Staircase (1908) and The Man in Lower Ten (1909), established her as a bright young talent, and it wasn’t long before she was a regular on bestseller lists.Among her dozens of novels were The Amazing Adventures of Letitia Carberry (1911) and The Bat (1932), which was among the inspirations for Bob Kane’s Batman. Today, Rinehart is often called an American Agatha Christie, even though she was much more popular than Christie during her heyday.

Otto Penzler, the creator of American Mystery Classics, is also the founder of the Mysterious Press (1975); Mysterious Press.com (2011), an electronic-book publishing company; and New York City’s Mysterious Bookshop (1979). He has won a Raven, the Ellery Queen Award, two Edgars (for the Encyclopedia of Mystery and Detection, 1977, and The Lineup, 2010), and lifetime achievement awards from Noircon and The Strand Magazine. He has edited more than 70 anthologies and written extensively about mystery fiction.
In 'The Wall', [Mary Roberts Rinehart] is at her best. . . . If one must criticize Mrs. Rinehart, it will have to be because she doesn’t write enough mystery stories.
— New York Times

This entry in the American Mystery Classics series is essential reading for genre fans.
— Publishers Weekly