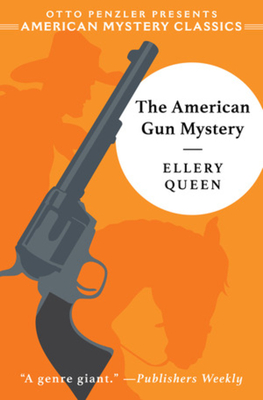 Ellery Queen investigates a murder at the circus rodeo

When a washed up Hollywood cowboy-turned-circus rodeo actor is shot dead in the midst of his performance at a New York sports-palace, in front of thousands of onlookers, it seems obvious that someone would have seen the perpetrator of the crime—or at the very least, recovered the gun. But when the ensuing investigation fails to turn up any evidence, even after the newsreels made in the moment are reviewed, the net of suspicion widens across the troupe of performers and the circus staff. Who among them is cunning enough to have constructed such a baffling murder scene?

Unluckily for the murderer, genius sleuth Ellery Queen is among the thousands that witnessed the crime, and he won’t be satisfied until he cuts through the confusion to discover the truth of the execution. By the time he uncovers all the necessary clues and delivers his patented “Challenge to the Reader,” Queen (and his most careful readers) will be able to expose both the killer and the hiding place of the weapon—the titular American Gun that fired the fatal bullet.

Reissued for the first time in over thirty years, The American Gun Mystery is among the most beloved of the early Ellery Queen novels, renowned to this day as exemplary works of the American Golden Age mystery. The central puzzle is a “fair play” story in which the reader has all the necessary clues needed to solve the crime.

Ellery Queen was a pen name created and shared by two cousins, Frederic Dannay (1905-1982) and Manfred B. Lee (1905-1971), as well as the name of their most famous detective. Born in Brooklyn, they spent forty-two years writing the greatest puzzle-mysteries of their time, gaining the duo a reputation as the foremost American authors of the Golden Age “fair play” mystery. Eventually famous on television and radio, Queen’s first appearance came in 1929 when the cousins won a mystery-writing contest with the book that would eventually be published as The Roman Hat Mystery. Besides co-writing the Queen novels, Dannay founded Ellery Queen’s Mystery Magazine, one of the most influential crime publications of all time. Although Dannay outlived his cousin by nine years, he retired the fictional Queen upon Lee’s death.

Otto Penzler, the creator of American Mystery Classics, is also the founder of the Mysterious Press (1975); Mysterious Press.com (2011), an electronic-book publishing company; and New York City’s Mysterious Bookshop (1979). He has won a Raven, the Ellery Queen Award, two Edgars (for the Encyclopedia of Mystery and Detection, 1977, and The Lineup, 2010), and lifetime achievement awards from Noircon and The Strand Magazine. He has edited more than 70 anthologies and written extensively about mystery fiction.
Good fun for fans of mystery's golden age.
— Booklist