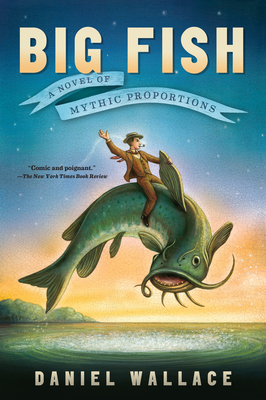 Information can be found in non-fiction, but if you're looking for the Truth, it lives in stories. For fans of Southern literature and amazing stories

Information can be found in non-fiction, but if you're looking for the Truth, it lives in stories. For fans of Southern literature and amazing stories

The classic novel that inspired the beloved Tim Burton film and the Broadway musical.

In his prime, Edward Bloom was an extraordinary man. He could outrun anybody. He never missed a day of school. He saved lives and tamed giants. Animals loved him, people loved him, women loved him. He knew more jokes than any man alive. At least that’s what he told his son, William. But now Edward Bloom is dying, and William wants desperately to know the truth about his elusive father—this indefatigable teller of tall tales—before it’s too late. So, using the few facts he knows, William re-creates Edward’s life in a series of legends and myths, through which he begins to understand his father’s great feats, and his great failings. The result is hilarious and wrenching, tender and outrageous.

Daniel Wallace is the author of six novels, including  Big Fish, which was adapted and released as a movie and a Broadway musical. His novels have been translated into over three-dozen languages. His essays and interviews have been published in The Bitter Southerner, Garden & Gun, Poets & Writers and Our State magazine, where he was, for a short time, the barbecue critic. His short stories have appeared in over fifty magazines and periodicals. He was awarded the Harper Lee Award, given to a nationally recognized Alabama writer who has made a significant lifelong contribution to Alabama letters. He was inducted into the Alabama Literary Hall of Fame in 2022. He is the J. Ross MacDonald Distinguished Professor of English at the University of North Carolina at Chapel Hill.

“A charming whopper of a tale.” —The San Diego Union-Tribune

“Both comic and poignant.” —The New York Times

“Refreshing, original . . . Wallace mixes the mundane and the mythical. His chapters have the transformative quality of fable and fairy tale.” —Publishers Weekly, starred review


“A comic novel about death, about the mysteries of parents and the redemptive power of storytelling.” —USA Today

“An audacious, highly original debut novel . . . An imaginative, and moving, record of a son’s love for a charming, unknowable father.” —Kirkus Reviews