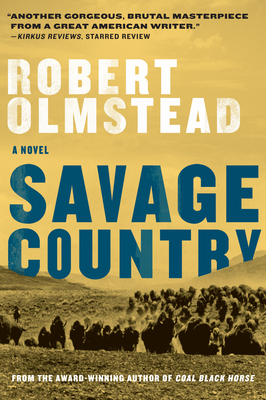 By Robert Olmstead
$15.95
On Our Shelves Now

A savage country indeed, where violence, both man-made and natural, is pervasive and threatens to soon ravage a pristine landscape. Robert Olmstead describes this world with a terrible beauty as a widow and her mysterious brother-in-law go on a buffalo hunt to recoup the family fortune in 1873 Kansas.  The stunning scenery and constant and casual brutality are brilliantly evoked by the author who has given us a novel strongly reminiscent of John Willams' great Butcher's Crossing.

“The year was 1873 and all about was the evidence of boom and bust, shattered dreams, foolish ambition, depredation, shame, greed, and cruelty . . .”

Onto this broken Western stage rides Michael Coughlin, a Civil War veteran with an enigmatic past, come to town to settle his dead brother’s debt. Together with his widowed sister-in-law, Elizabeth, bankrupted by her husband’s folly and death, they embark on a massive, and hugely dangerous, buffalo hunt. Elizabeth hopes to salvage something of her former life and the lives of the hired men and their families who now depend on her; the buffalo hunt that her husband had planned, she now realizes, was his last hope for saving the land.

Elizabeth and Michael plunge south across the aptly named “dead line” demarcating Indian Territory from their home state of Kansas. Nothing could have prepared them for the dangers: rattlesnakes, rabies, wildfire, lightning strikes, blue northers, flash floods—and human treachery. With the Comanche in winter quarters, Elizabeth and Michael are on borrowed time, and the cruel work of harvesting the buffalo is unraveling their souls.

Bracing, direct, and quintessentially American, Olmstead’s gripping narrative follows that infamous hunt, which drove the buffalo to near extinction. Savage Country is the story of a moment in our history in which mass destruction of an animal population was seen as a road to economic salvation. But it’s also the intimate story of how that hunt changed Michael and Elizabeth forever.

Robert Olmstead is the author of eight previous books. Coal Black Horse was the winner of the Heartland Prize for Fiction. The Coldest Night was a finalist for the Dayton Literary Peace Prize. Far Bright Star was the winner of the Western Writers of America Spur Award. Olmstead is the recipient of a Guggenheim Fellowship and an NEA grant and is a professor at Ohio Wesleyan University.

“The precision and poetry of the author's language have a paradoxical effect: they make the setting strange and distinct while imbuing characters and their actions with a particular immediacy . . . A story about America told through its land and its animals and its diverse people and, especially, through the experiences of two vivid, singular, powerful characters. Another gorgeous, brutal masterpiece from a great American writer.”
─Kirkus Reviews (starred review)

“This is a powerful depiction of the brutality of the Old West, where life was cheap and easily taken.”
─Publishers Weekly

“[A] deeply emotional experience . . . Savage Country is an unforgettable, unflinching, yet distinctly moving story of human greed and desire.”
─BookPage

“Like so many outstanding novels about the taming of the West, there is a tragic ambiguity at the heart of Olmstead’s brutal but beautiful tale of the last buffalo hunt. For a certain kind of uncompromising yet lyrical writer – think Cormac McCarthy, Larry McMurtry, or William Kittredge – the West offers a stage for a special kind of archetypal, almost Shakespearean tragedy, and Olmstead makes the most of it.”
─Booklist (starred review)

“[A] majestic, thrilling tale of a small band of people hunting buffalo in the territory south of Kansas in the tense and unpredictable years after the Civil War.”
─Columbus Dispatch