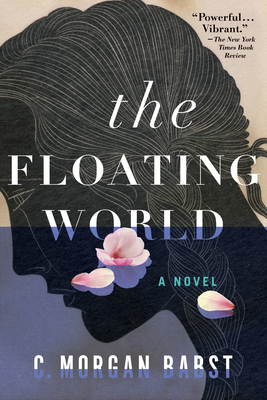 “Set in New Orleans, this important and powerful novel follows the Boisdoré family . . . in the months after Katrina. A profound, moving and authentically detailed picture of the storm’s emotional impact on those who lived through it.” —People

In this dazzling debut about family, home, and grief, C. Morgan Babst takes readers into the heart of Hurricane Katrina and the life of a great city.

As the storm is fast approaching the Louisiana coast, Cora Boisdoré refuses to leave the city. Her parents, Joe Boisdoré, an artist descended from freed slaves who became the city’s preeminent furniture makers, and his white “Uptown” wife, Dr. Tess Eshleman, are forced to evacuate without her, setting off a chain of events that leaves their marriage in shambles and Cora catatonic—the victim or perpetrator of some violence mysterious even to herself.

This mystery is at the center of Babst’s haunting and profound novel. Cora’s sister, Del, returns to New Orleans from the successful life she built in New York City to find her hometown in ruins and her family deeply alienated from one another. As Del attempts to figure out what happened to her sister, she must also reckon with the racial history of the city and the trauma of a disaster that was not, in fact, some random act of God but an avoidable tragedy visited on New Orleans’s most vulnerable citizens. Separately and together, each member of the Boisdoré clan must find the strength to remake home in a city forever changed.

The Floating World is the Katrina story that needed to be told—one with a piercing, unforgettable loveliness and a vivid, intimate understanding of this particular place and its tangled past.

C. Morgan Babst studied writing at NOCCA, Yale, and NYU. Her essays and short fiction have appeared in such journals as the Oxford American, Guernica, the Harvard Review, LitHub, and the New Orleans Review, and her piece “Death Is a Way to Be” was honored as a Notable Essay in Best American Essays 2016. She evacuated New Orleans one day before Hurricane Katrina made landfall. After eleven years in New York, she now lives in New Orleans with her husband and child.

“Set in New Orleans, this important and powerful novel follows the Boisdoré family . . . in the months after Katrina. A profound, moving and authentically detailed picture of the storm’s emotional impact on those who lived through it.”
—People

"C. Morgan Babst's portrait of a troubled New Orleans family that fractures further during and after Hurricane Katrina is poetic and suspenseful . . . an ambitious novel."
—NPR.org

"Powerful . . . Babst is most effective at conveying the emotional weight of the tragedy when she presents it alongside vibrant characters and story lines. One of the most vibrant is the family patriarch, Vincent, whom Babst brings to life in a portrayal that’s impressively unrestrained, even Faulknerian."
—The New York Times Book Review

“This is a spot-on examination of race and the tumult natural disasters leave in their wake.”
—Marie Claire

“This powerful family drama (with a mystery at its core) promises to be an emotional read. A dazzling debut about family, home, and grief, The Floating World takes readers into the heart of Hurricane Katrina with the story of the Boisdorés, whose roots stretch back nearly to the foundation of New Orleans.”
—Paste Magazine

“This unforgettable and timely novel tells the story of those who lost everything in the hurricane and the lives they sought to rebuild.”
—RealSimple.com

“In the wake of hurricanes Harvey and Irma, Babst's mystery about a southern family dealing with the aftermath of Hurricane Katrina—and a mentally ill family member who opted to stay behind during the storm—is oddly prescient.”
—InStyle.com

“Set in New Orleans in the aftermath of Hurricane Katrina, this wrenching and hypnotic book will give you chills with its descriptions of the flooding.”
—Bustle

“As hurricane victims begin the arduous process of recovering and rebuilding their communities, The Floating World offers a fictional, but very real, example of the struggles they’ll face. What becomes of those harmed by natural disasters after the news cameras leave and attention is diverted to the next human crisis? That’s the question at the center of The Floating World, a book that will surely give its readers empathy for all those who are putting their lives back together.”
—BitchMedia

“One of the best novels of 2017. The Floating World is a lived-in meditation on the meaning of home, and what happens when home suffers a blow born of both natural disaster and human negligence. It's a reminder that compassion has limitations, and that the aftermath can be as bad as or worse than the storm.”
—The Dallas Morning News

“The Floating World is a beautiful novel that speaks profoundly to the current moment.”
—Chicago Review of Books

“This debut novel . . . is the Katrina story that still needs to be told.”
—Birmingham Magazine

“The Floating World is the Katrina story that needed to be told, one with a piercing, unforgettable loveliness and a nuanced understanding of this particular place and its tangled past.”
—Deep South Magazine

“A soulful inquiry of race, class, and family in the dawn of trauma, The Floating World doesn’t just look into the eye of such a devastating storm. The storm itself becomes the lens through which the Boisdorés begin to see the world more clearly. Through it, we see what loyalty truly looks like—the impossible choice to stay or leave, the terrorizing heartbreak of return—and the cost of what we hold onto, what we must release in order to survive.”
—Ploughshares

“With a gripping yet deliberate narrative infused with vivid descriptions, Babst takes her time with this story, allowing it to build slowly and methodically with an appropriate weight, enhancing the confusion wrought by the storm. In contrast, Cora's point of view significantly intensifies the pace, lending an urgency to the novel and making her narrative feel almost cyclonic. A native of New Orleans who evacuated one day before Hurricane Katrina, Babst has an intimate understanding and knowledge of the region's people and rich culture, its topography and the complex forces of race and class. The result is in a timely debut novel about the power of nature and its omnipresent potential for destruction in every aspect of our lives.”
—Shelf Awareness

“Reminiscent of Jonathan Franzen’s The Corrections, The Floating World is also a meditation on kinship and family history. Babst’s novel is an invaluable record of that social devastation—and a warning of the devastations like Harvey to come.”
—BookPage

“[A] powerful, important novel . . . This novel is New Orleans to the bone, an authentic, detailed picture of the physical and emotional geography of the city, before, during, and after the tragedy, its social strata, its racial complications, the zillion cultural details that define its character: the parrots in the palm trees, the pork in the green beans, the vein in the shrimp, ‘the goddamned tacky way he flew his Rex flag out of season.’ Deeply felt and beautifully written; a major addition to the literature of Katrina.”
—Kirkus Reviews, starred review

“Babst’s tightly written debut focuses on the fractured Boisdoré clan, whose familial tensions are brought to a head in the immediate aftermath of Hurricane Katrina . . . this is a riveting novel about the inescapable pull of family.”
—Publishers Weekly

“The Floating World is a thought-provoking story of class and race and trauma, told through the dramatic prism of Hurricane Katrina and its aftermath. Babst’s sentences are so fresh and alive they leap off the page. This is a beautiful and captivating book.”
—Jessica Shattuck, NYT bestselling author of The Women in the Castle

“This book is an achingly precise diagram of a city and family in heartbreak. Babst’s writing is fluid and insidious and hauntingly beautiful. The Boisdorés join some of the great families of American fiction, fascinating kinfolk through whom we watch the rise and fall and rise of New Orleans.”
—Kaitlyn Greenidge, author of We Love You, Charlie Freeman

“In The Floating World, C. Morgan Babst masterfully, hauntingly, evokes the devastated and devastating landscape of post-Katrina New Orleans with images that are at once surreal and painfully real.”
—Helen Phillips, author of The Beautiful Bureaucrat

“This is a rich and powerful novel, satisfying on many levels--wry, eloquent, passionate, and completely memorable.”
—Valerie Martin, author of Property and The Ghost of Mary Celeste

“In powerfully lyrical prose, Morgan Babst evokes the shattered lives strewn in the wake of the levee collapses that left New Orleans in ruins. It’s a story still difficult to believe--even by those of us who lived through it.”
—John Biguenet, author of The Rising Water Trilogy

“This powerful and lyrical novel captures the emotional currents in New Orleans after Katrina. With an authentic and sensitive voice, Morgan Babst explores family, race, class, and the essence of disruption.”
—Walter Isaacson, bestselling author of Steve Jobs