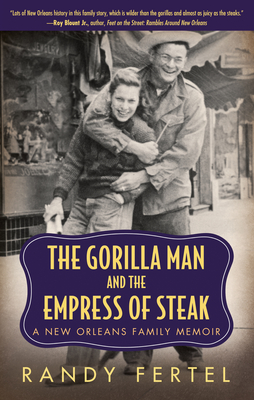 The Gorilla Man and the Empress of Steak is the story of two larger-than-life characters and the son whom their lives helped to shape. Ruth Fertel was a petite, smart, tough-as-nails blonde with a weakness for rogues, who founded the Ruth's Chris Steak House empire almost by accident. Rodney Fertel was a gold-plated, one-of-a-kind personality, a railbird-heir to wealth from a pawnshop of dubious repute just around the corner from where the teenage Louis Armstrong and his trumpet were discovered. When Fertel ran for mayor of New Orleans on a single campaign promise-buying a pair of gorillas for the zoo-he garnered a paltry 308 votes. Then he purchased the gorillas anyway

These colorful figures yoked together two worlds not often connected-lazy rice farms in the bayous and swinging urban streets where ethnicities jazzily collided. A trip downriver to the hamlet of Happy Jack focuses on its French-Alsatian roots, bountiful tables, and self-reliant lifestyle that inspired a restaurant legend. The story also offers a close-up of life in the Old Jewish Quarter on Rampart Street-and how it intersected with the denizens of Back a' Town, just a few blocks away, who brought jazz from New Orleans to the world.

The Gorilla Man and the Empress of Steak is a New Orleans story, featuring the distinctive characters, color, food, and history of that city-before Hurricane Katrina and after. But it also is the universal story of family and the full magnitude of outsize follies leavened with equal measures of humor, rage, and rue.