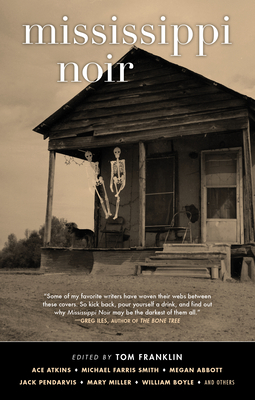 
On Our Shelves Now
In these stories, from Biloxi to Hattiesburg, from Jackson to Oxford, the various crimes of the heart or doomed deeds of fractured households are carried out in real Mississippi locales . . . Are a devilishly wrought introduction to writers with a feel for Mississippi who are pursuing lonely, haunting paths of the imagination.
--Associated Press

The big city has no lock on misery in these 16 portraits of dark doings in the Deep South.
--Kirkus Reviews

Mississippi, as Franklin notes in his introduction, has the most corrupt government, the highest rate of various preventable ills, and the highest poverty rate in the country. In short, the state is a natural backdrop for noir fiction. The 16 stories...emerge from a cauldron of sex, race, ignorance, poverty, bigotry, misunderstanding, and sheer misfortune.
--Publishers Weekly

Mississippi is the perfect setting for the latest volume in Akashic's long-running noir series . . . The most memorable pieces take the definition of noir beyond the expected: William Boyle's 'Most Things Haven't Worked Out' is reminiscent of the gothic fatalism in Flannery O'Connor's stories, while Michael Kardos's 'Digits, ' about a writing teacher whose students come to class with fewer and fewer fingers, veers into Shirley Jackson territory.
--Library Journal

Maybe it's the oppressive heat and humidity, or maybe it's the high rates of poverty, crime and corruption that plague this southern state. Whatever the reason, Mississippi is the perfect setting for a good noir story . . . The Noir series] is adept at finding the dark underbelly of cities big and small, but it has produced a unique, delicious flavor of noir fiction with this Mississippi installment.
--New York Daily News

These chilling stories . . . consistently embody the ideal of noir writing with a strong sense of place . . . These pages drip with Mississippi humidity. Fans of classic noir will be pleased and rooted in this redolent setting.
--Shelf Awareness for Readers

Akashic Books continues its groundbreaking series of original noir anthologies, launched in 2004 with Brooklyn Noir. Each story is set in a distinct neighborhood or location within the geographic area of the book.

From the introduction by Tom Franklin:

Welcome to Mississippi, where a recent poll shows we have the most corrupt government in the United States. Where we are first in infant mortality, childhood obesity, childhood diabetes, teenage pregnancy, adult obesity, adult diabetes. We also have the highest poverty rate in the country. And, curiously, the highest concentration of kick-ass writers in the country too. Okay, maybe that's not a Gallup poll-certified statistic, but we do have more than our fair share of Pulitzers and even a Nobel...I could go on, and in fact I do, in this very anthology...

Here are sixteen stories from seasoned noir writers like Ace Atkins and Megan Abbott as well as Mississippi's new generation of noirists, authors like William Boyle and Michael Kardos. You'll also find unknown, first-time-published writers like Dominiqua Dickey and Jimmy Cajoleas, who won't remain unknown for long. I'm thrilled to bring these writers to you. In Alabama, where I grew up, we had a saying: Thank God for Mississippi, otherwise we'd be at the bottom in everything.

Welcome to the bottom.

Tom Franklin is the author of Poachers: Stories and three novels, Hell at the Breech, Smonk, and Crooked Letter, Crooked Letter, which won the Los Angeles Times Book Prize for Mystery/Thriller, the Willie Morris Prize in Southern Fiction, and the UK's Gold Dagger Award for Best Novel. His latest novel, The Tilted World, was cowritten with his wife, Beth Ann Fennelly. They live in Oxford, Mississippi, where they teach in the University of Mississippi's MFA program.