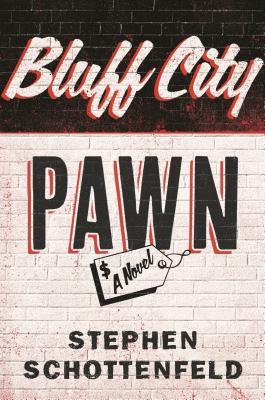 Huddy Marr, the proprietor of Bluff City Pawn shop in Memphis, is good at what he does: he knows jewelry, he knows guns and guitars. But the neighborhood is changing: A blood bank is set to open across the street from the retail space he leases from his brother Joe, and Huddy wants to move to a less seedy part of town. A pawn shop should stay right on the edge of seedy.

When a longtime client dies, his widow calls Huddy to come appraise his considerable gun collection. If he can buy up the guns, Huddy knows he can make a killing, possibly change his fortunes for good. But he needs cash up front, and for that he needs Joe. Soon the restless youngest, Harlan, is also involved-they could use the manpower to move the haul-and slowly the brothers' old family dynamics reassert themselves.

Stephen Schottenfeld's first novel is a masterful depiction of a city, a business, and a family. It is an investigation of class and law, ownership and value, loyalty, betrayal, and blood; one that gathers power and resonates long after it's done.

Stephen Schottenfeld is a graduate of the Iowa Writers' Workshop. His stories have appeared in the Gettysburg Review, TriQuarterly, StoryQuarterly, the Virginia Quarterly Review, the Iowa Review, New England Review, and other journals, and have received special mention in both the Pushcart Prize and Best American Short Stories anthologies. Schottenfeld teaches English at the University of Rochester.

“Bluff City Pawn is an absorbing, relevant, and literary thriller about desperation, trust and betrayal, brotherhood, Memphis, and the highest and lowest ends of consumerism - the secondhand world of the downtrodden, and the rarified world of collectors of the esoteric. If you care about class and capitalism in America right now – and you should – then this is your novel.” —Anthony Doerr, author of The Shell Collector

“Bluff City Pawn is a rare achievement -- beautifully written, packed with life and infused with a deliciously subtle suspense. The result is an irresistibly gripping novel that unfolds with mesmerizing clarity.” —Joanna Scott, author of Follow Me

“Stephen Schottenfeld's Bluff City Pawn is a taut, beautifully written novel that has a rare, almost feverish propulsion. Some people might call it a page turner. So be it. For me, I only wanted to slow down and savor. From the very first paragraph, I was completely immersed in Huddy's vivid world. Best of all, he's among the most unforgettable characters I've read in recent years.” —Peter Orner, author of Love and Shame and Love