Denmark Vesey's Garden: Slavery and Memory in the Cradle of the Confederacy (Hardcover) 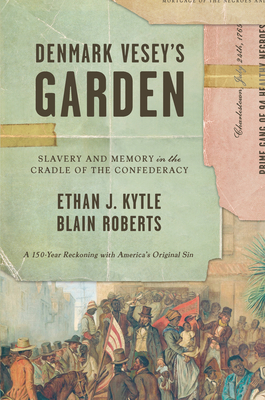 Denmark Vesey's Garden: Slavery and Memory in the Cradle of the Confederacy (Hardcover)

A wholly original, well-researched examination of the memory of slavery in this country from its abolition to the present. The authors use the city of Charleston in South Carolina as a lens to show that following the Civil War there emerged two distinct threads as to how slavery would come to be remembered. One thread was that of the romanticized memory of the Old South put forth by descendants of the former slaveholders and the other thread was an unvarnished account of the brutality of slavery that came from the descendants of the former slaves and some white allies. These two narratives continued to evolve, become entrenched, and even intertwine so that as the authors follow the threads within the community of Charleston over time they provide a vital key to the understanding of many of the current events which continue to divide our nation in the present day.

Slavery has never been a simple subject to contemplate and the narrative of the South's "peculiar institution" has always been complex, even more so since the end of the Civil War and the rise of revisionist historians. That narrative is the subject of this new, intense study which is so relevant to today's continued dialogue about a subject that has always divided the country. Using Charleston, the former leading city of slavery and the Confederacy, as a base the authors delineate the perversions of the historical data and place an important perspective which is essential to modern thought and scholarship.

— From Bill's 2018 Picks
One of Janet Maslin's Favorite Books of 2018, The New York Times One of John Warner's Favorite Books of 2018, Chicago Tribune Named one of the "Best Civil War Books of 2018" by the Civil War Monitor "A fascinating and important new historical study."
--Janet Maslin, The New York Times "A stunning contribution to the historiography of Civil War memory studies."
--Civil War Times In the tradition of James Loewen's Lies My Teacher Told Me, a deeply researched book that uncovers competing histories of how slavery is remembered in Charleston, South Carolina--the heart of Dixie

A book that strikes at the heart of the recent flare-ups over Confederate symbols in Charlottesville, New Orleans, and elsewhere, Denmark Vesey's Garden reveals the deep roots of these controversies and traces them to the heart of slavery in the United States: Charleston, South Carolina, where almost half of the U.S. slave population stepped onto our shores, where the first shot at Fort Sumter began the Civil War, and where Dylann Roof shot nine people at Emanuel A.M.E. Church, the congregation of Denmark Vesey, a black revolutionary who plotted a massive slave insurrection in 1822.