Zero Six Bravo: The Explosive True Story of How 60 Special Forces Survived Against an Iraqi Army of 100,000 (Hardcover) 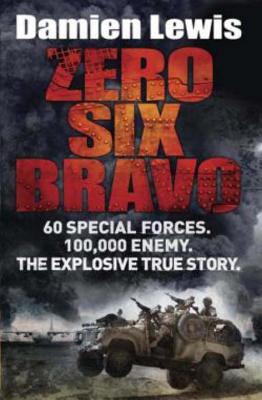 Zero Six Bravo: The Explosive True Story of How 60 Special Forces Survived Against an Iraqi Army of 100,000 (Hardcover)


Email or call for price.
Damien Lewis has spent twenty years reporting from conflict zones around the world. Zero Six Bravo--a Sunday Times number one bestseller--tells the story of "sixty special forces against 100,000--a feat of arms to take the breath away." (Frederick Forsythe) They were branded as cowards and accused desertion. But nothing could be further from the truth. Ten years on, the story of these sixty men can finally be told.

In March 2003, M Squadron--an SBS unit with SAS embeds--was sent 1,000 kilometers behind enemy lines on a true mission impossible, to take the surrender of the 100,000-strong Iraqi Army 5th Corps, an operation so risky it earned the nickname â??Operation No Return' right out of the gate. Caught in a ferocious ambush by Saddam Hussein's Fedayeen, plus the awesome firepower of the 5th Corps' heavy armor, and with eight of their vehicles bogged in Iraqi swamps, M Squadron launched a desperate bid to escape, inflicting massive damage on their enemies. Running low on fuel and ammunition, outnumbered, and outgunned, the elite operators destroyed sensitive information and prepared for death or capture as the Iraqis closed their deadly trap.

Zero Six Bravo contains previously unpublished information detailing the essential involvement of American troops in this astonishing military feat. Zero Six Bravo recounts in vivid and compelling detail the most desperate battle fought by British and allied Special Forces trapped behind enemy lines since World War Two.
Damien Lewis has spent twenty years reporting from war, disaster and conflict zones around the world. He has written a dozen non-fiction and fiction books, topping bestseller lists worldwide, and is published in some thirty languages. Two of his books are being made into feature films.
"A dramatic story that few ever knew about."—Metro


"One of the best accounts of a behind-enemy-lines mission ever."—Phil Campion, ex-SAS and author of Born Fearless

"The most dangerous mission of the Second Gulf War."—Sun

"Sixty Special Forces against 100,000--a feat of British arms to take the breath away."—Frederick Forsyth

"Suspenseful and well-written... Lewis does an excellent job of maintaining tension... he vividly recounts the soldiers' fatigue, stress and fear."—Kirkus Reviews

"Sent against overwhelming odds by bad intelligence and wishful thinking, the sixty men of British Special Forces' M Squadron found themselves surrounded by Iraq's 5th Corps, 100,000 of Saddam's finest, plus thousands of fanatical Fedayeen militia. Damien Lewis' true story of the courage and valor of the fierce warriors who guard our civilization is mesmerizin. Zero Six Bravo is an absolute must read."—Stephen Coonts, author of Pirate Alley