Assassins, Eccentrics, Politicians, and Other Persons of Interest: Fifty Pieces from the Road (Hardcover) 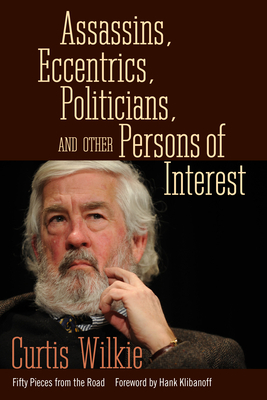 Assassins, Eccentrics, Politicians, and Other Persons of Interest: Fifty Pieces from the Road (Hardcover)


On Our Shelves Now
Writing as a newspaper reporter for nearly forty years, Curtis Wilkie covered eight presidential campaigns, spent years in the Middle East, and traveled to a number of conflicts abroad. However, his memory keeps turning home and many of his most treasured stories transpire in the Deep South. He called his native Mississippi, "the gift that keeps on giving." For Wilkie, it represented a trove of rogues and racists, colorful personalities and outlandish politicians who managed to thrive among people otherwise kind and generous. Assassins, Eccentrics, Politicians, and Other Persons of Interest collects news dispatches and feature stories from the author during a journalism career that began in 1963 and lasted until 2000. As a young reporter for the Clarksdale Press Register, he wrote many articles that dealt with the civil rights movement, which dominated the news in the Mississippi Delta during the 1960s.Wilkie spent twenty-six years as a national and foreign correspondent for the Boston Globe. One of the original "Boys on the Bus" (the title of a best-selling book about journalists covering the 1972 presidential campaign), he later wrote extensively about the winning races of two southern Presidents, Jimmy Carter and Bill Clinton. Wilkie is known for stories reported deeply, rife with anecdotes, physical descriptions, and important background details. He writes about the notorious, such as the late Hunter S. Thompson, as well as more anonymous subjects whose stories, in his hands, have enduring interest. The anthology collects pieces about several notable southerners: Ross Barnett; Byron De La Beckwith and Sam Bowers; Billy Carter; Edwin Edwards and David Duke; Trent Lott; and Charles Evers. Wilkie brings a perceptive eye to people and events, and his eloquent storytelling represents some of the best journalistic writing.
Curtis Wilkie spent most of his career as a national and foreign correspondent for the Boston Globe. After his retirement, he joined the faculty at the University of Mississippi, where he teaches journalism and serves as a fellow at the Overby Center for Southern Journalism and Politics. He is author of three earlier books, including The Fall of the House of Zeus.