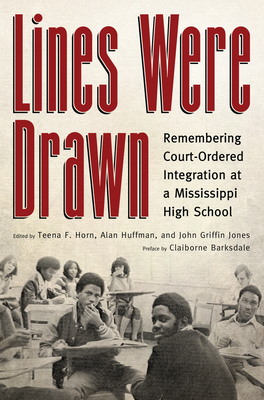 Oral histories gathered by three graduates of a major high school in Jackson Lines Were Drawn looks at a group of Mississippi teenagers whose entire high school experience, beginning in 1969, was under federal court-ordered racial integration. Through oral histories and other research, this group memoir considers how the students, despite their markedly different backgrounds, shared a common experience that greatly influences their present interactions and views of the world--sometimes in surprising ways. The book is also an exploration of memory and the ways in which the same event can be remembered in very different ways by the participants. The editors (proud members of Murrah High School's Class of 1973) and more than fifty students and teachers address the reality of forced desegregation in the Deep South from a unique perspective--that of the faculty and students who experienced it and made it work, however briefly. The book tries to capture the few years in which enough people were so willing to do something about racial division that they sacrificed immediate expectations to give integration a true chance. This period recognizes a rare moment when the political will almost caught up with the determination of the federal courts to finally do something about race. Because of that collision of circumstances, southerners of both races assembled in the public schools and made integration work by coming together, and this book seeks to capture those experiences for subsequent generations. Teena F. Horn, Houston, Mississippi, is a wife, mother, dentist, small business owner, and farmer in rural Mississippi. Alan Huffman, Bolton, Mississippi, is a freelance journalist and author of five other nonfiction books including Mississippi in Africa: The Saga of the Slaves of Prospect Hill Plantation and Their Legacy in Liberia and Ten Point: Deer Camp in the Mississippi Delta, both published by University Press of Mississippi. He has appeared on NPR and numerous other radio shows, The Daily Show with Jon Stewart, PBS, Fox News, and other national TV shows. John Griffin Jones, Jackson, Mississippi, is a trial lawyer, author, and father. He is the interviewer/editor of Mississippi Writers Talking and Mississippi Writers Talking II, both published by University Press of Mississippi, and numerous law-related publications.