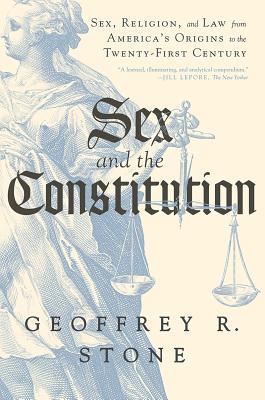 Stone is a legal scholar (University of Chicago School of Law) who tracks the intersections and undulating movements of sexual mores, religion, and law over the course of American history, giving us a clearer perspective on where we are now, in 2017.  Laurence Tribe said “This masterpiece is the rarest of combinations, a page-turner that is also a magisterial font of wisdom.”

A “volume of lasting significance” that illuminates how the clash between sex and religion has defined our nation’s history (Lee C. Bollinger, president, Columbia University).

Lauded for “bringing a bracing and much-needed dose of reality about the Founders’ views of sexuality” (New York Review of Books), Geoffrey R. Stone’s Sex and the Constitution traces the evolution of legal and moral codes that have legislated sexual behavior from America’s earliest days to today’s fractious political climate. This “fascinating and maddening” (Pittsburgh Post-Gazette) narrative shows how agitators, moralists, and, especially, the justices of the Supreme Court have navigated issues as divisive as abortion, homosexuality, pornography, and contraception. Overturning a raft of contemporary shibboleths, Stone reveals that at the time the Constitution was adopted there were no laws against obscenity or abortion before the midpoint of pregnancy. A pageant of historical characters, including Voltaire, Thomas Jefferson, Anthony Comstock, Margaret Sanger, and Justice Anthony Kennedy, enliven this “commanding synthesis of scholarship” (Publishers Weekly) that dramatically reveals how our laws about sex, religion, and morality reflect the cultural schisms that have cleaved our nation from its founding.

Geoffrey R. Stone is the author of the prize-winning Perilous Times. He is the Edward H. Levi Distinguished Service Professor of Law at the University of Chicago and one of our nation’s leading constitutional scholars.