Unsettled Ground: The Whitman Massacre and Its Shifting Legacy in the American West (Hardcover) 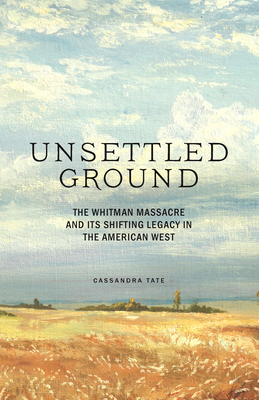 Unsettled Ground: The Whitman Massacre and Its Shifting Legacy in the American West (Hardcover)

A highly-readable, myth-busting history of the Whitman Massacre—a pivotal event in the history of the American West—that includes the often-missing Indian point of view

In 1836, Marcus and Narcissa Whitman, devout missionaries from upstate New York, established a Presbyterian mission on Cayuse Indian land near what is now the fashionable wine capital of Walla Walla, Washington. Eleven years later, a group of Cayuses killed the Whitmans and eleven others in what became known as the Whitman Massacre. The attack led to a war of retaliation against the Cayuse; the extension of federal control over the present-day states of Washington, Oregon, Idaho, and parts of Montana and Wyoming; and martyrdom for the Whitmans. Today, however, the Whitmans are more likely to be demonized as colonizers than revered as heroes.

“[Tate] tells the Cayuse’s side of the story with empathy and clarity . . . a meticulously researched book.” —The Seattle Times
CASSANDRA TATE is a Seattle-based writer and editor. A former journalist, she earned a Ph.D in American history at the University of Washington in 1995. She is the author of Cigarette Wars: The Triumph of "The Little White Slaver." Her work has been published in Smithsonian, Columbia Journalism Review, and other national magazines, and she has contributed more than 200 articles to HistoryLink.org, the online encyclopedia of Washington State history. She is a former Nieman Fellow at Harvard University.
Washington State Book Award Finalist

“Unsettled Ground is both the gripping adventure story of a cross-continental journey and a cultural exploration of the collision of two very different ways of life. . . . Told with depth and insight, Tate’s account is a prism that allows us to see the multiple dimensions of a classic frontier conflict.”
—Peter Stark, author of Astoria: John Jacob Astor and Thomas Jefferson’s Lost Pacific Empire

“I consider Unsettled Ground one of the most important Northwest history books ever written.”
—John Hughes, Chief Historian, Washington Secretary of State

“Even well-read aficionados of Western history will be surprised and perhaps dismayed by Tate’s comprehensive and masterfully layered narrative.”
—Shannon Applegate, author of Skookum: An Oregon Pioneer Family’s History and Lore and Living Among Headstones: Life in a Country Cemetery

“In this overdue era of righting unbalanced histories, Cassandra Tate reexamines a deadly tragedy from the nineteenth-century American West. Unsettled Ground is a riveting blend of intricate research, fresh cultural perspective, and first-rate storytelling.”
—Dave Boling, author of Guernica and The Lost History of Stars

“....by turns moving, evenhanded and lyrical in its evocation of time and place.”
—Seattle Times

"In this moment when we as a nation grapple with systemic racism and injustice, Unsettled Ground is a timely book."
—Pacific Northwest Quarterly

"A highly readable, myth-busting, fact-based story. [A] tale for all who love the West, its history and its truths."
—The Inlander