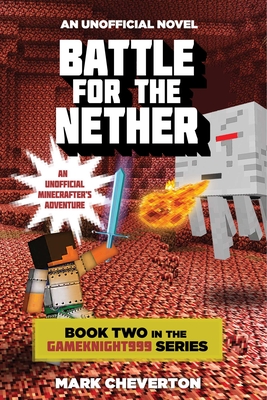 By Mark Cheverton
$9.99
Usually Arrives in Store in 1-5 Days

This is book number 2 in the Gameknight999 Series series.

Gameknight999, a real-life Minecraft user trapped inside the game he loves to play, and his friend Crafter have transported to a new server. Malacoda is the King of the Nether, a terrible ghast that wants to destroy all of Minecraft with his massive army of blazes, magma cubes, zombie pigmen, and wither skeletons.

Knowing the lives of all those within Minecraft—as well as those in the physical world—are depending on them, Gameknight and Crafter will need to search the land to recruit an NPC army. But the battles Gameknight’s already fought have left him doubting his abilities, and he’ll need to dig deep to find his courage if he’s to have any shot at victory.

Epic battles, terrible monsters, heartwarming friendships, and spine-tingling suspense . . . Battle for the Nether takes the adventures of Gameknight999 to the next level in a nonstop roller-coaster ride of adventure.

Mark Cheverton is a former high school physics and math teacher, and the father of a Minecraft fanatic. The first book in his Gameknight999 series, which is set in the world of Minecraft, was published in 2013.