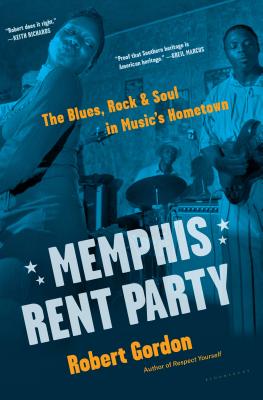 "Blues, being the wellspring of all American music for over a century, is always worth studying. Robert does it right." --Keith Richards

"An emotional map of musical Memphis. If you don't know these characters, let Robert Gordon introduce you." --Elvis Costello

"Robert Gordon's book is proof that Southern heritage is American heritage, and all sorts of people--black and white, familiar and strange, dead and alive--are what it is." --Greil Marcus

Profiles and stories of Southern music from the acclaimed author of Respect Yourself: Stax Records and the Soul Explosion.

The fabled city of Memphis has been essential to American music--home of the blues, the birthplace of rock and roll, a soul music capital. We know the greatest hits, but celebrated author Robert Gordon takes us to the people and places history has yet to record. A Memphis native, he whiles away time in a crumbling duplex with blues legend Furry Lewis, stays up late with barrelhouse piano player Mose Vinson, and sips homemade whiskey at Junior Kimbrough's churning house parties. A passionate listener, he hears modern times deep in the grooves of old records by Lead Belly and Robert Johnson.

The interconnected profiles and stories in Memphis Rent Party convey more than a region. Like mint seeping into bourbon, Gordon gets into the wider world. He beholds the beauty of mistakes with producer Jim Dickinson (Replacements, Rolling Stones), charts the stars with Alex Chilton (Box Tops, Big Star), and mulls the tragedy of Jeff Buckley's fatal swim. Gordon's Memphis inspires Cat Power, attracts Townes Van Zandt, and finds James Carr always singing at the dark end of the street.

A rent party is when friends come together to hear music, dance, and help a pal through hard times; it's a celebration in the face of looming tragedy, an optimism when the wolf is at the door. Robert Gordon finds mystery in the mundane, inspiration in the bleakness, and revels in the individualism that connects these diverse encounters.

Robert Gordon has been writing about Memphis music and history for thirty years and is the author of It Came from Memphis, Can’t Be Satisfied, The King on the Road, The Elvis Treasures, and Respect Yourself. He won a Grammy in 2011 for his liner notes to the Big Star box set Keep an Eye on the Sky. His film work includes producing and directing the documentary Respect Yourself: The Stax Records Story and also the Emmy-winning Best of Enemies. Gordon lives in Memphis.

"Best Books of the Year" - NPR

"Notable Books of the Year "- No Depression

"10 Best Music Books of the Year" - Vinyl Me Please

"Gordon has spent his life closely chronicling the lives of his hometown's most famous and obscure sons and daughters . . . [He] weaves these tales together with cogent self-analysis, creating a narrative that's both a biography of his city and the story of his own sentimental education." - Ann Powers, NPR, "Best Books of the Year"

"Robert's feel for his subject is very similar to the subjects' feel for their music. Blues, being the wellspring of all American music for over a century, is always worth studying. Robert does it right." - Keith Richards

"This is an emotional map of musical Memphis. If you don't know these characters, let Robert Gordon introduce you. If they are familiar to you, then you will enjoy the wit and modesty of his portraiture and perspective." - Elvis Costello

"Beginning with Sam Phillips turning David Letterman to jelly on national TV--an event that needs Robert Gordon to fix it in history--his book is proof that Southern heritage is American heritage, and all sorts of people--black and white, familiar and strange, dead and alive--are what it is." - Greil Marcus

"There's no better guide to the back streets, studios, picnics, and juke joints of Memphis and north Mississippi than Gordon." - No Depression, “Notable Books of the Year"

"Everyone who steps into the spotlight in Gordon's collection shares a compulsion to do things her own way, to dance to his own off-tempo beat . . . go where few else dare . . . Cat Power's interview is heartbreakingly intimate, so unguarded . . . The profile on soul singer James Carr smashes the reader to pieces." - Memphis Flyer

"This is the kind of history that only an insider could write . . . These are conversations between contemporaries, people who speak the same language, even if Gordon is always careful to position himself as the respectful fan. Memphis Rent Party gets the heart of the blues in ways other history books simply can’t. It’s wonderful and heartbreaking all at once" - Tulsa Book Review

"[Gordon's] enthusiasm and curiosity are contagious . . . His writing is borne of the place, the scene. He isn't pondering his subjects from afar, but is with them, asking questions, listening to their stories, trying to crack the mystery and get to what is really real." - Arkansas Democrat Gazette

"A personal, affecting collection . . . [Gordon] has the rare ability to convey the power, emotion, and depth of feeling that music can produce. In piece after piece in Memphis Rent Party, the author does what only the best music journalists can do: motivate readers to run out and find the wonderful music they’ve just read about. I’ve already picked up some from several of the artists profiled in this captivating book. You should, too." - Washington Independent Review of Books

"Gordon's insightful writing and desire to understand his subjects is evident . . . Through interviews and research he seeks the heart and soul of both the music and the people creating it . . . It's a literary portrait of the soul that Gordon has been seeking since that hot July day in Memphis and which he shares with readers on every page of this marvelous collection." - Chapter16.org

"In this excellent collection of essays, Gordon, a veteran music journalist on the Memphis scene, masterfully writes about the outlaws, rebels, and tragic figures who provided the spark for the city's entertainment industry . . . A grand, funky musical tour of Memphis." - Publishers Weekly

"The artists and musical styles Gordon covers here, while united by the Memphis connection, are highly diverse . . . As an insider, Gordon is perfectly placed to bring together all the aspects of the incredibly varied Memphis music scene . . . It hits the mark." - Booklist

"Robert Gordon has done more than anyone alive to plumb the extraordinary depths of Memphis music and to chart the lives of the intensely original souls who've produced and performed it. Here in this richly reported collection of non-fiction gems, Gordon gives us a powerful sense of the weird and wonderful cross-pollinations that have long made Memphis the gestation ground for our nation's most righteous and authentic music. With Memphis Rent Party, you’ll be tapping your foot from the first page to the last." - Hampton Sides, author of HELLHOUND ON HIS TRAIL

"Robert Gordon is the real thing." - Nick Tosches, author of ME AND THE DEVIL

"With his latest effort, Memphis Rent Party, Gordon digs into his archives to spin a paean to the rich musical heritage of the Bluff City . . . Where Memphis Rent Party really shines, for this reader, is in Gordon’s tales of the eccentric and original talents that make Memphis a musical melting pot that has long struggled for the respect the city deserves . . . Gordon does an impressive job in capturing the grease, sweat, and heartbeat of Memphis music on the pages of Memphis Rent Party, and you can’t really ask for nothing more from this literary love letter to the writer’s hometown." - That Devil Music