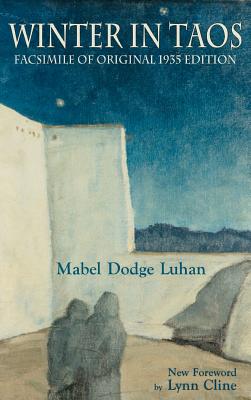 
Usually Arrives in Store in 1-5 Days
"Winter in Taos" starkly contrasts Luhan's memoirs, published in four volumes and inspired by Marcel Proust's "Remembrances of Things Past." They follow her life through three failed marriages, numerous affairs, and ultimately a feeling of "being nobody in myself," despite years of psychoanalysis and a luxurious lifestyle on two continents among the leading literary, art and intellectual personalities of the day. "Winter in Taos" unfolds in an entirely different pattern, uncluttered with noteworthy names and ornate details. With no chapters dividing the narrative, Luhan describes her simple life in Taos, New Mexico, this "new world" she called it, from season to season, following a thread that spools out from her consciousness as if she's recording her thoughts in a journal. "My pleasure is in being very still and sensing things," she writes, sharing that pleasure with the reader by describing the joys of adobe rooms warmed in winter by aromatic cedar fires; fragrant in spring with flowers; and scented with homegrown fruits and vegetables being preserved and pickled in summer. Having wandered the world, Luhan found her home at last in Taos. "Winter in Taos" celebrates the spiritual connection she established with the "deep living earth" as well as the bonds she forged with Tony Luhan, her "mountain." This moving tribute to a land and the people who eked a life from it reminds readers that in northern New Mexico, where the seasons can be harshly beautiful, one can bathe in the sunshine until "'untied are the knots in the heart, ' for there is nothing like the sun for smoothing out all difficulties." Born in 1879 to a wealthy Buffalo family, Mabel Dodge Luhan earned fame for her friendships with American and European artists, writers and intellectuals and for her influential salons held in her Italian villa and Greenwich Village apartments. In 1917, weary of society and wary of a world steeped in war, she set down roots in remote Taos, New Mexico, then publicized the tiny town's inspirational beauty to the world, drawing a steady stream of significant guests to her adobe estate, including artist Georgia O'Keeffe, poet Robinson Jeffers, and authors D.H. Lawrence and Willa Cather. Luhan could be difficult, complex and often cruel, yet she was also generous and supportive, establishing a solid reputation as a patron of the arts and as an author of widely read autobiographies. She died in Taos in 1962.