The Good Captain: A Personal Memoir of America at War (Hardcover) 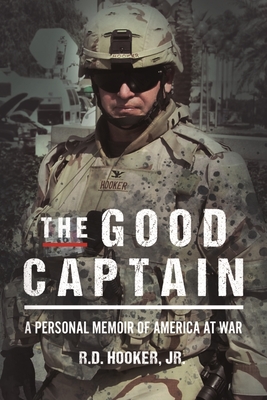 The Good Captain: A Personal Memoir of America at War (Hardcover)


Usually Arrives in Store in 1-5 Days
"This is a compelling tale of service, not only of experiences but also of the spirit and ethos that animates the warrior's soul. I hope that young Americans read Rich Hooker's story, understand better the rewards of a life of service, and look for ways that they too might help defend and strengthen our Republic. - Lieutenant General H. R. McMaster, USA (Ret), former National Security Adviser

R. D. Hooker, Jr. was a combat soldier and leader in five wars. He then served as a senior Pentagon advisor and as a White House staff member in four different administrations. At the time of his retirement from the military in 2010 he was the most decorated colonel in the US Army.

Beginning with his enlistment at 18 in 1975, this memoir chronicles his experiences in the post-Vietnam Army as a young paratrooper, as a West Point cadet, and as a combatant in the many military conflicts which followed. Hooker served in the invasion of Grenada, in the earliest days of the Somalia intervention, as one of the first American responders to the Rwandan genocide, with the first American units to enter both Bosnia and Kosovo, in peace-keeping operations in the Sinai desert, in the Pentagon on 9/11, and again in combat in Iraq and Afghanistan. Rising from private to colonel, he commanded a paratroop company, battalion and brigade and served in the continental US, Latin America, Europe, the Middle East, Africa and Southwest Asia. When not serving with troops, he taught at West Point and served in several high-level Pentagon assignments and in the White House in the administrations of George H. W. Bush, Bill Clinton, George W. Bush and Donald Trump.

As a gritty and accomplished combat soldier and leader of vast experience, the author's writing conveys a first-person, hands-on appreciation of the American soldier and of close combat, around the globe and through five different conflicts, in all its demanding, heroic, and often tragic dimensions. Few if any memoirs of this genre can match the narrative arc shown here. In addition, the author describes each of these campaigns from a strategic and policy perspective informed by his White House and Pentagon experiences as well as years of academic training. The juxtaposition of these contrasting perspectives is compelling and unique.