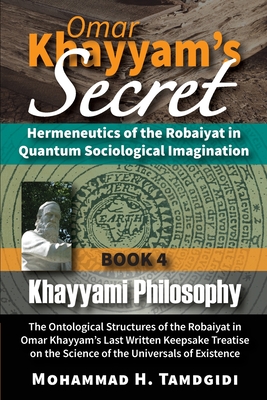 Omar Khayyam's Secret: Hermeneutics of the Robaiyat in Quantum Sociological Imagination, authored by Mohammad H. Tamdgidi, is a 12-book series of which this is the 4th volume, subtitled Khayyami Philosophy: The Ontological Structures of the Robaiyat in Omar Khayyam's Last Written Keepsake Treatise on the Science of the Universals of Existence. Each book, independently readable, can be best understood as a part of the whole series.

Having confirmed in the prior three books of the series the true dates of birth and passing of Omar Khayyam, his pen name origins, and his authorship of a robaiyat collection, Tamdgidi explores in this fourth book the origins, nature, and purpose of such a collection by applying the series' quantum sociological imagination method to hermeneutically explore the ontological structures of the Robaiyat in Khayyam's last written treatise.

Khayyam's treatise, found in the early 20th century and still largely ignored or misread, radically challenges the mythical narratives built over the centuries about him as one who thought existence is unknowable, having died not solving its riddles. Strangely, his treatise instead offers a logically coherent and brilliant worldview of someone who has found his answers as far as human existence is concerned. Khayyam even goes so far as confidently saying he hopes his peers would agree that his brief treatise is more useful than volumes.

Offering the Persian text and his new English translation of the treatise, Tamdgidi undertakes in this book a detailed clause-based hermeneutic study of the treatise. He also explores its broader intellectual and historical contexts by examining its relation to the book "Savior from Error" by Khayyam's junior (by more than three decades) contemporary foe, Muhammad Ghazali, while questioning the long-held belief that the treatise was requested by and addressed to Fakhr ol-Molk, a son of the famous vizier Nezam ol-Molk.

Tamdgidi finds instead that the treatise was written in AD 1095-96, a few years earlier than thought, for another son of Nezam ol-Molk, Moayyed ol-Molk, who served at the time Soltan Muhammad, Malekshah's son. The treatise was intended as a philosophical foundation to move the post-Malekshah Iran in a more independent direction by way of influencing his son, Muhammad. Ghazali in his book, likely written to please Ahmad Sanjar (Malekshah's younger son who disliked Khayyam) and his vizier at the time, Fakhr ol-Molk, anonymously chastised Khayyam as a philosopher, duplicitously feeding the cynical metaphors that some theologians and Sufis hurled at Khayyam down the centuries.

Khayyam's treatise unveils his vision of existence as a participatory universe where the subject has objective status, shedding a new light on the ontological structures of the Robaiyat. His "succession order" thesis of existence is an alternative Islamic creationist-evolutionary worldview that offers a prescient quantum conceptualist vision of the universe as a unitary, relatively self-reliant, self-knowing, and self-creative, substance lovingly created by an absolutely good God in His own image. Existence is essentially good but, due to its good volitionally self-creative nature, can be potentially subject to incidental defects that are nevertheless knowable and curable to build both a spiritually fulfilling and a joyful life in this world. Other than God's Necessary Existence there is no "another world"; judgment days, heavens, and hells are definitely real this-worldly, not after-worldly, existents. In Khayyam's view, human existence can be what good we artfully make of it, starting here-and-now from our own personal selves in our this-worldly lifetimes. It is to creatively realize such an existence that the Robaiyat must have been intended.