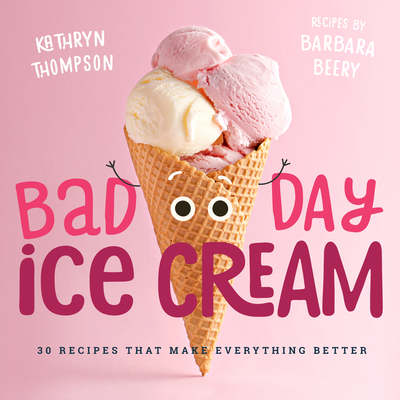 Having a bad day? A bad week? A bad year? Bad Day Ice Cream is the cure to all that ails you!

Life is unpredictable, and bad days happen. While ice cream may not be a cure-all, when combined with encouraging advice it can be just the pick-me-up you need to keep going. This tongue-in-cheek cookbook makes the perfect gift for anyone going through a rough patch. Celebrated cookbook author Barbara Beery has created 50 unique recipes to help you get through any bumps in the rocky road, from getting a speeding ticket to dealing with a nosy mother-in-law. With humor that is anything but vanilla, Kathryn Thompson, author of the viral blog and book Drops of Awesome, provides the perfect dose of down-to-earth advice (or is it commiseration?) to put every piece of bad news in perspective. It's the cherry on top of each delightful treat!

Barbara Beery, founder of Foodie Kids Culinary Center in Austin, TX (one of the country's first kids-only culinary schools), has taught thousands of children over the past 30 years through year-round classes, cooking birthday parties, and summer cooking camps.

Barbara worked as a spokesperson for such national companies as Sun-Maid Raisin, Uncle Ben's Borden's, Kellogg's Rice Krispies, and Step 2.

Since 2002, Barbara has been a contributing writer to FamilyFun, the country's leading family magazine. She has appeared twice on the Today Show, on CBN with Pat Robertson, and her business has been featured in the New York Times and Entrepreneur Magazine, as well asdozens of other local and national publications.

Kathryn Thompson is a freelance writer and blogger living outside Seattle with her computer-genius husband and three frequently delightful children. She believes that the world would be a drastically better place if everyone understood how awesome they were.

Kathryn is a self-certified, imminently renowned ice cream clinician, with years of experience consuming and prescribing frozen desserts. She has been featured everywhere from The Today Show to The Seattle Times, and you can find her writing scattered around the internet. Check out her personal site: DropsofAwesome.com.