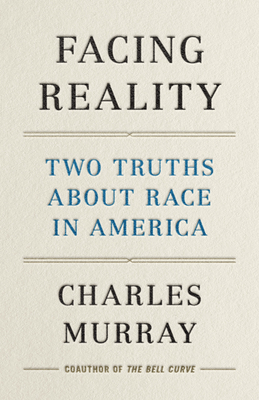 In his newest book, Charles Murray fearlessly states two controversial truths about the American population: American whites, blacks, Hispanics, and Asians have different violent crime rates and different means and distributions of cognitive ability. If we aim to navigate public policy with wisdom and realism, these realities must be brought into the light.

"Facing Reality provides a powerful overview of one perspective that those who allege sweeping forms of systemic or institutional racism find it all to convenient to ignore―or cancel without due consideration."―Wilfred Reilly, Commentary

"Facing Reality is a bold, important book which should be widely read and discussed." ―Amy L. Wax, Professor of Law at the University of Pennsylvania Law School, for the Claremont Review of Books

The charges of white privilege and systemic racism that are tearing the country apart float free of reality. Two known facts, long since documented beyond reasonable doubt, need to be brought into the open and incorporated into the way we think about public policy: American whites, blacks, Hispanics, and Asians have different violent crime rates and different means and distributions of cognitive ability. The allegations of racism in policing, college admissions, segregation in housing, and hiring and promotions in the workplace ignore the ways in which the problems that prompt the allegations of systemic racism are driven by these two realities.

What good can come of bringing them into the open? America's most precious ideal is what used to be known as the American Creed: People are not to be judged by where they came from, what social class they come from, or by race, color, or creed. They must be judged as individuals. The prevailing Progressive ideology repudiates that ideal, demanding instead that the state should judge people by their race, social origins, religion, sex, and sexual orientation. We on the center left and center right who are the American Creed's natural defenders have painted ourselves into a corner. We have been unwilling to say openly that different groups have significant group differences. Since we have not been willing to say that, we have been left defenseless against the claims that racism is to blame. What else could it be? We have been afraid to answer. We must. Facing Reality is a step in that direction.
Charles Murray is the Hayek Emeritus Scholar at the American Enterprise Institute. He first came to national attention in 1984 with the publication of Losing Ground, followed by the The Bell Curve in 1994 and Coming Apart in 2012. He lives with his wife in Burkittsville, Maryland.