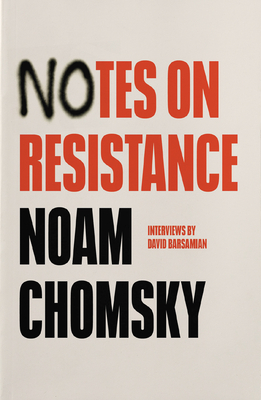 Noam Chomsky dissects the multiple crises facing humankind and the planet; and provides a road map for resistance.

In this completely original set of interviews between the legendary duo of Noam Chomsky and David Barsamian, the two confront topics such as the pandemic, the wealth gap (made worse because of the pandemic), climate destruction, the increasing power of the corporate owned media, systematic racism, Big Tech, and more. Noam Chomsky is one of the most cited scholars in human history. He ranks right up there with Aristotle and Marx, and this book reaffirms his esteemed reputation. Notes on Resistance will inspire all those struggling for human liberation.

Noam Chomsky is Institute Professor (emeritus) in the Department of Linguistics and Philosophy at the Massachusetts Institute of Technology and Laureate Professor of Linguistics and Agnese Nelms Haury Chair in the Program in Environment and Social Justice at the University of Arizona. His work is widely credited with having revolutionized the field of modern linguistics.Chomsky is the author of numerous best-selling political works, which have been translated into scores of countries worldwide. Recent books include What Kind of Creatures Are We?, as well as Optimism and Despair, and Internationalism of Extinction. David Barsamian has altered the independent media landscape, both with his weekly radio show Alternative Radio--now in its 35th year--and his books with Noam Chomsky, Eqbal Ahmad, Howard Zinn, Tariq Ali, Richard Wolff, Arundhati Roy and Edward Said. His latest book with Noam Chomsky is Global Discontents: Conversations on the Rising Threats to Democracy. He lectures on world affairs, imperialism, capitalism, propaganda, the media, the economic crisis and global rebellions.David Barsamian is the winner of the Media Education Award, the ACLU's Upton Sinclair Award for independent journalism, and the Cultural Freedom Fellowship from the Lannan Foundation. The Institute for Alternative Journalism named him one of its Top Ten Media Heroes. He is the recipient of the Lifetime Achievement Award from the Rocky Mountain Peace and Justice Center. In 2017 the South Asian Network for Secularism and Democracy presented him with their Lifetime Achievement Award. He has collaborated with the world-renowned Kronos Quartet in events in New York, London, Vienna and elsewhere.