Shoot the Moonlight Out: A Novel (Hardcover) 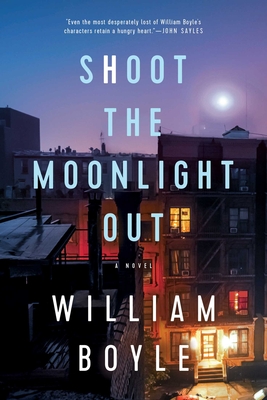 Shoot the Moonlight Out: A Novel (Hardcover)

— From In Store Event: William Boyle for Shoot the Moonlight Out
A haunting crime story about the broken characters inhabiting yesterday's Brooklyn, this is the new novel from modern master of neo-noir William Boyle.

An explosive crime drama, Shoot the Moonlight Out evokes a mystical Brooklyn where the sidewalks are cracked, where Virgin Mary statues tilt in fenced front yards, and where smudges of moonlight reflect in puddles even on the blackest nights.

Southern Brooklyn, July 1996. Fire hydrants are open and spraying water on the sizzling blacktop. Punk kids have to make their own fun. Bobby Santovasco and his pal Zeke like to throw rocks at cars getting off the Belt Parkway. They think it’s dumb and harmless until it’s too late to think otherwise. Then there’s Jack Cornacchia, a widower who lives with his high school age daughter Amelia and reads meters for Con Ed but also has a secret life as a vigilante, righting neighborhood wrongs through acts of violence. A simple mission to strong-arm a Bay Ridge con man, Max Berry, leads him to cross paths with a tragedy that hits close to home.

Fast forward five years: June 2001. The summer before New York City and the world changed for good. Charlie French is a low-level gangster-wannabe trying to make a name for himself. When he stumbles onto a bowling alley locker stuffed with a bag full of cash, he brings it to his only pal, Max Berry, for safekeeping while he cleans up the mess surrounding it. Bobby Santovasco—with no real future mapped out and the big sin of his past shining brightly in his rearview mirror—has taken a job working as an errand boy for Max Berry. On a recruiting run for Max’s Ponzi scheme, Bobby meets Francesca Clarke, born in the neighborhood but an outsider nonetheless. They hit it off. Bobby gets the idea to knock off Max’s safe so he and Francesca can escape Brooklyn forever. Little does he know what Charlie French has stashed there.

Meanwhile, Bobby’s former stepsister, Lily Murphy, is back home in the neighborhood after college, teaching a writing class in the basement of St. Mary's church. She's also being stalked by her college boyfriend. One of her students is Jack Cornacchia. When she opens up to him about her stalker, Jack decides to take matters into his own hands.

A riveting portrait of lives crashing together at the turn of the century, Shoot the Moonlight Out is tragic and tender and funny and strange. A sense of loss is palpable—what has been lost and what will be lost—and Boyle’s characters face down old ghosts with grim determination, as ripples of consequence radiate in dangerous directions.
William Boyle is from Brooklyn, New York. His novels include: Gravesend, which was nominated for the Grand Prix de Littérature Policière in France; The Lonely Witness, which was nominated for the Hammett Prize and the Grand Prix de Littérature Policière; A Friend Is a Gift You Give Yourself, an Amazon Best Book of the Year; and, most recently, City of Margins, a Washington Post Best Thriller and Mystery Book of 2020. He lives in Oxford, Mississippi.
Praise for Shoot the Moonlight Out

"William Boyle knows how to craft a tight quilt of a plot while at the same time grounding that plot in a setting of wonderful richness. His Brooklyn is specific and clear and alive, a place he knows cold. He’s able to capture the messiness of life with the acuity of a dedicated realist, but he shapes that messiness in such a way that he keeps everything moving forward and toward a definitive resolution. Controlled and yet loose is how I would describe Shoot the Moonlight Out, and for my money, that’s a blend of two traits that’s no small achievement. [Shoot the Moonlight Out] is a novel that rings true down to the tiniest detail."
— Criminal Element

"William Boyle’s stark and turbulent crime thriller boasts an endlessly fascinating and empathetic cast of characters. Hailing from Brooklyn himself, Boyle imbues the setting with an air of authenticity and stark realism as his characters leap from the page. Readers can only grasp at the slimmest of hopes in this grim, modern-day noir, but the determination of Boyle's characters defies expectations."
— BookPage, Starred Review

"Heartrending tragedy brings three emotionally damaged people together to heal in this magnificently written murder mystery. Boyle lets his wrecked individuals experience unexpected kindness in a bleak world to encourage their humanity. This effect is akin to witnessing the beauty of a flower growing through a crack of a neglected sidewalk. Bravo to William Boyle."
— Shelf Awareness

"Boyle’s novels always deliver, and they always work on different levels: as noir and crime, as character studies, as working-class social commentaries. They’re also impossible to put down and stay with you long after you’ve finished them."
— Southwest Review

"William Boyle has established his skills at evoking the recent history of New York City (and, in particular, Brooklyn) — and setting gripping works of fiction there."
— Vol. 1 Brooklyn

"A kaleidoscopic vision of life in South Brooklyn, shifting between timelines and perspectives to bring together a swirling, fate-laced story of modern New York. Boyle’s work is keeping a very particular strand of the noir legacy alive, and with each new book he adds another piece to New York City’s rich literary history. Shoot the Moonlight Out is one of his best stories to date, an ambitious take on crime and tragedy in South Brooklyn."
— Lit Hub, Most Anticipated Books of 2021

"Boyle emerges not just as a consummate crime writer but as a poet of the underclass, unwaveringly portraying lives gone wrong but still finding a little moonlight ‘spilling its light on the cracks in the sidewalks and all the cracked hearts.’”
— Booklist, Starred Review

"William Boyle’s Shoot the Moonlight Out is his best yet, an operatic ode to passion and grief, reckless youth and radical forgiveness, and most of all the pangs and beauty of parental love, unswerving and irreplaceable. Sprawling yet intimate, epic yet full of the lived-in humor of the great Sidney Lumet or Richard Price, it hums hard in your heart long after the final page.”
— Megan Abbott

"As wildly funny and sweet as it is frenetic and harrowing, William Boyle’s new novel is full of dark splendor. Imagine Martin Scorsese and David O. Russell collaborating with Gena Rowlands and Ellen Burstyn and making magic.”
— Megan Abbott, New York Times bestselling author of You Will Know Me

“Boyle studies his neighbors with a mixture of affection and despair worthy of a Bruce Springsteen song. He has a real thing for working-class folks. People like this, they need people like Boyle.”
— Marilyn Stasio, The New York Times Book Review

“The grandly talented Boyle is still in the Brooklyn neighborhood where he grew up. He knows the music of the Italian American voices, from punk to bar stool to operatic, like nobody else: Mob goons, college dropouts, melancholy widows and pink-haired rockers mix it up in this deliciously convoluted tale that reads like a fresh new season of The Sopranos.”
— The Washington Post

“Boyle’s latest is another slice of gritty urban noir. The author’s exquisitely drawn characters soon uncover secrets and make connections with each other that echo those of a Greek tragedy, with similar results. Boyle comfortably stands next to literary crime favorites like Don Winslow, Richard Price, and Lou Berney.”
— Library Journal (starred))

“A precious gem of a crime novel. Boyle is in top form, delivering a work that had me thinking about Dennis Lehane’s Mystic River and, thanks to Boyle’s dark, knowing humor, the work of New Yorkers like Pete Hamill and Jimmy Breslin.”
— Mystery Scene

“A marvelously nuanced study of light and dark. The arts bridge generations, start conversations and, in Boyle's masterful hands, provide softening, wide-angle lenses to the broken and tortured souls of the margins.”
— Shelf Awareness

“Another fine novel from William Boyle in the tradition of John Sayles and John Fante.”
— Criminal Element

"A Jacobean revenge tangle in a Brooklyn where all the players have survived the same nuns. Even the most desperately lost of William Boyle's characters retain a hungry heart.”
— John Sayles, director of Matewan and Lone Star

"A funny, gritty, touching narrative about the strength of three New York women caught in a world of abusive men, broken families, and mob violence. Crime fiction usually stays within the confines of the genre, but Boyle breaks away from those restrictions.”
— NPR

"A brilliant and nasty piece of joyful ambiguity that I Ioved deeply. What a marvelous and unexpected bunch of female characters, in particular. With this one, William Boyle vaults into the big time, or he damn sure should.”
— Joe R. Lansdale, author of the Hap & Leonard series