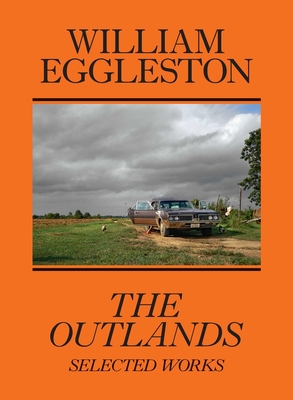 
On Our Shelves Now
A selection of nearly one hundred previously unseen images from the 1960s and 1970s by the pioneer of color photography, William Eggleston.

The Outlands, a series of photographs taken by Eggleston between 1969 and 1974, establishes the groundbreaking visual themes and lexicon that the artist would continue to develop for decades to come. The work offers a journey through the mythic and evolving American South, seen through the artist’s lens: vibrant colors and a profound sense of nostalgia echo throughout Eggleston’s breathtaking oeuvre. His motifs of signage, cars, and roadside scenes create an iconography of American vistas that inspired a generation of photographers. With its in-depth selection of unforgettable images—a wood-paneled station wagon, doors flung open, parked in an expansive rural setting; the artist’s grandmother in the moody interior of their family’s Sumner, Mississippi home—The Outlands is emblematic of Eggleston’s dynamic, experimental practice. The breadth of work reenergizes his iconic landscapes and forms a new perspective of the American South in transition.

Accompanying the ninety brilliant Kodachrome images and details, a literary, fictional text by the critically acclaimed author Rachel Kushner imagines a story of hitchhikers trekking through the Deep South. New scholarship by Robert Slifkin reframes the art-historical significance of Eggleston’s oeuvre, proposing affinities with work by Marcel Duchamp, Dan Graham, Jasper Johns, and Robert Smithson. A foreword by William Eggleston III offers important insights into the process of selecting and sequencing this series of images.
Over the course of nearly six decades, William Eggleston has established a singular pictorial style that deftly combines vernacular subject matter with an innate and sophisticated understanding of color, form, and composition. His photographs transform the ordinary into distinctive, poetic images that eschew fixed meaning. His 1976 solo exhibition at The Museum of Modern Art, New York, curated by John Szarkowski, marked one of the first presentations of color photography at the museum. Although initially criticized for its unfamiliar approach, the show and its accompanying catalogue, William Eggleston's Guide, heralded an important moment in the medium’s acceptance within the art-historical canon, and it solidified the artist’s position as one of its foremost practitioners to date. Eggleston’s work continues to exert an influence on contemporary visual culture at large.

Rachel Kushner is the author of the novels The Mars Room, The Flamethrowers, and Telex from Cuba, as well as a book of short stories, The Strange Case of Rachel K. Her most recent book, The Hard Crowd, offers twenty years of essays on politics, art, and culture. She is a Guggenheim Foundation Fellow and the recipient of the Harold D. Vursell Memorial Award from the American Academy of Arts and Letters. She has won the Prix Médicis and been a finalist for the Booker Prize and the National Book Critics Circle Award, and was twice a finalist for the National Book Award in Fiction. Her books have been translated into twenty-six languages. Her fiction has appeared in The New Yorker, The Paris Review, and Harper’s Magazine, and her essays in Artforum, Bookforum, and The New York Times Magazine. She lives in Los Angeles.

Robert Slifkin is a professor of fine arts at the Institute of Fine Arts, New York University, where he teaches classes on modern and contemporary art and photography. He is the author of The New Monuments and the End of Man: U.S. Sculpture Between War and Peace, 1945–1975 and Out of Time: Philip Guston and the Refiguration of Postwar American Art, which was awarded the Phillips Book Prize. His essays and reviews have appeared in such journals as American Art, Artforum, The Art Bulletin, Art Journal, Burlington Magazine, October, Oxford Art Journal, and Racquet.
"I’ll be adding this to my own wishlist and will be giving it to at least a couple others."
— Bebe Howorth, senior interiors editor

"Eggleston stands alone as the greatest living photographer . . . an ingenious rhymester . . . a milestone in the recognition of color photography as art."
— Arthur Lubow

"These motifs, now signature to not only Eggleston, but to the way we imagine the American vista, give this book a profoundly sentimental thread."
— Vanity Fair

“The colors are rich, the scenery unmistakable. William Eggleston's America is one that we have all seen but never noticed.”
— Juxtapoz Magazine

“The Outlands isn’t merely about the process of looking, but about practising how to see.”
— ArtReview