The Reed Smoot Hearings: The Investigation of a Mormon Senator and the Transformation of an American Religion (Hardcover) 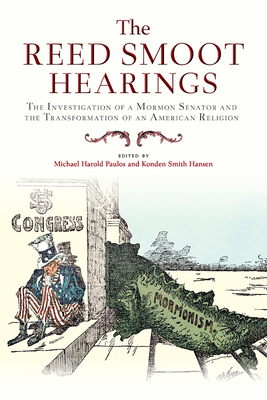 The Reed Smoot Hearings: The Investigation of a Mormon Senator and the Transformation of an American Religion (Hardcover)

This book examines the hearings that followed Mormon apostle Reed Smoot’s 1903 election to the US Senate and the subsequent protests and petitioning efforts from mainstream Christian ministries disputing Smoot’s right to serve as a senator. Exploring how religious and political institutions adapted and shapeshifted in response to larger societal and ecclesiastical trends, The Reed Smoot Hearings offers a broader exploration of secularism during the Progressive Era and puts the Smoot hearings in context with the ongoing debate about the constitutional definition of marriage.

The work adds new insights into the role religion and the secular played in the shaping of US political institutions and national policies. Chapters also look at the history of anti-polygamy laws, the persistence of post-1890 plural marriage, the continuation of anti-Mormon sentiment, the intimacies and challenges of religious privatization, the dynamic of federal power on religious reform, and the more intimate role individuals played in effecting these institutional and national developments.

The Smoot hearings stand as an important case study that highlights the paradoxical history of religious liberty in America and the principles of exclusion and coercion that history is predicated on. Framed within a liberal Protestant sensibility, these principles of secular progress mapped out the relationship of religion and the nation-state for the new modern century. The Reed Smoot Hearings will be of significant interest to students and scholars of Mormon, western, American, and religious history.

Konden Smith Hansen is lecturer at the University of Arizona in the religious studies department, where he teaches courses in American religion, world religions, religion and violence, and Mormonism. He is the author of Frontier Religion: Mormons and America, 1857–1907 and has published in the Journal of Mormon History, Reading Religion, and Mormons and Popular Culture.

“This remarkable volume deepens our understanding of this watershed moment, not only for the Church of Jesus Christ of Latter-day Saints but also for the nation during the Progressive era.”
—Randall Balmer, Dartmouth University

"This volume of vividly imagined, deeply researched essays on the Reed Smoot hearings is a boon to scholars, students, and lay readers with interests in the Latter-day Saints, the politics of marriage and intimate relationships, the permutations of the church-state compact, the uneven advance of religious pluralism, and the dawn of an American secular age."
—Tracy Fessenden, Arizona State University