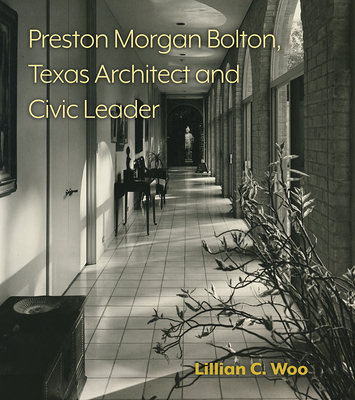 “Always have a view,” one of Preston Bolton’s favorite sayings, speaks to his architecture, which made the landscape an integral part of the built environment. In his sixty-plus–year architectural career, Bolton, outstanding alumnus of the Texas A&M College of Architecture, designed over 798 projects, has had designs featured in 74 publications, and won 34 design awards. While many of his peers moved on to more public or larger-scale designs, Bolton chose to make his mark on residential architecture in Houston. Focusing on the human element, Bolton believed that everyday life was enhanced by infusing dignity and delight into the built environment.

In Preston Morgan Bolton, Texas Architect and Civic Leader, author Lillian Woo writes that Bolton is “a true Texan who developed his values and visions with conviction and unwavering determination,” and whose structures “have stood the tests of time and taste.” With her own style, Woo captures the spirit of Preston Bolton, tracing his architectural career from its beginnings and offering glimpses into his life, serving as a US Army officer in World War II, and becoming a civic and cultural leader in the Houston arts community. The book features some of his award-winning designs, including the Winterbotham residence, Safford residence, two Bolton residences, Loy residence, Ranch House, Halpern-Humble residence, and Shartle residence, as well as an appendix of his letters home from World War II.

LILLIAN C. WOO, an economist, was a political and legislative advisor for 30 years and is the author of The Campaign Organizer’s Manual and Women in Change: The Psychological Development of American Women, the result of a national Ford Foundation project that Woo headed for the University of North Carolina. She is also the coauthor of Dictionary of Ecodesign: An Illustrated Reference. She currently writes about the environment and lives in West Hyannisport, Massachusetts.