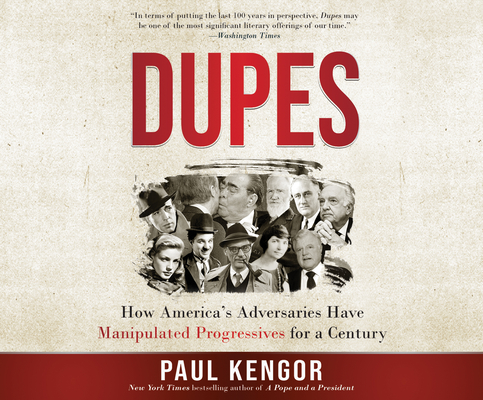 By Paul Kengor, Buck Groat (Read by)
$19.99
Backordered -- Email or Call for Availability

In this startling, intensively researched book, bestselling historian Paul Kengor shines light on a deeply troubling aspect of American history: the prominent role of the "dupe." From the Bolshevik Revolution through the Cold War and right up to the present, many progressives have unwittingly aided some of America's most dangerous opponents.Based on never-before-published FBI files, Soviet archives, and other primary sources, Dupes reveals- Shocking reports on how Senator Ted Kennedy secretly approached the Soviet leadership to undermine not one but two American presidents- Stunning new evidence that Frank Marshall Davis--mentor to a young Barack Obama--had extensive Communist ties and demonized Democrats- Jimmy Carter's woeful record dealing with America's two chief foes of the past century, Communism and Islamism- Today's dupes, including the congressmen whose overseas anti-American propaganda trip was allegedly financed by foreign intelligence- How Franklin Roosevelt was duped by "Uncle Joe" Stalin--and by a top adviser who may have been a Soviet agent--despite clear warnings from fellow Democrats- How John Kerry's accusations that American soldiers committed war crimes in Vietnam may have been the product of Soviet disinformation- The many Hollywood stars who were duped, including Humphrey Bogart, Lauren Bacall, Katharine Hepburn, Gene Kelly--and even Ronald Reagan.