Four for the Road (Hardcover) 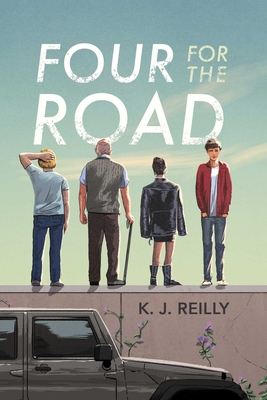 Four for the Road (Hardcover)


On Our Shelves Now
The Perks of Being a Wallflower meets The End of the F***ing World in this dark young adult comedy about four unlikely friends dealing with the messy side of grief who embark on a road trip to Graceland.

Specifically, he wants revenge on the drunk driver who killed his mom and got off on a technicality. No one seems to think this is healthy, though, which is how he ends up in a bereavement group (well, bereavement groups. He goes to several.) It’s there he makes some unexpected friends: There’s Sloane, who lost her dad to cancer; Will, who lost his little brother to a different kind of cancer; and eighty-year-old Henry, who was married to his wife for fifty years until she decided to die on her own terms. And it’s these three who Asher invites on a road trip from New Jersey to Graceland. Asher doesn’t tell them that he’s planning to steal his dad’s car, or the real reason that he wants to go to Tennessee (spoiler alert: it’s revenge)—but then again, the others don’t share their reasons for going, either.

Complete with unexpected revelations, lots of chicken Caesar salads at roadside restaurants, a stolen motorcycle, and an epic kiss at a rest stop minimart, what begins as the road trip to revenge might just turn into a path towards forgiveness.
K. J. Reilly graduated from Boston University with a BA in psychology then headed to New York City to work in the marketing research departments of several of the largest advertising agencies in the world. She loves reading, writing, dogs, sailboats, cycling, children of all shapes and sizes, and growing her own food. She is the author of Words We Don’t Say. Four for the Road is her second young adult novel. Learn more at KJReillyAuthor.com and on Instagram and Twitter @KJReillyAuthor.
* "Reilly uses empathetic prose, and Asher’s by turns biting and achingly earnest voice, to expertly portray the white-cued group’s journey through individual and shared grief."
— Publishers Weekly, Starred Review

* "Reilly explores the avenues of grief most people don't encounter until they are older, and she does it with bright, funny characters who hold onto one another and the truths that unfold on their trip."
— Booklist, Starred Review

* "So overwhelming is the load of trauma [each character carries] that it’s hard to see how their journey could end on a buoyant note, but Reilly pulls it off by developing rich friendships while artfully slipping in comical elements on the way to a climactic whirl of laughter, tears, budding romance, and well-placed insights. . . A heady round trip, heavy baggage and all, from heartbreak to healing."
— Kirkus Reviews, Starred Review