The Fight of Our Lives: My Time with Zelenskyy, Ukraine's Battle for Democracy, and What It Means for the World (Hardcover) 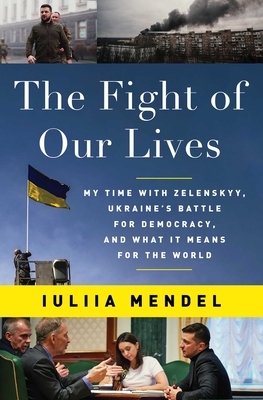 The Fight of Our Lives: My Time with Zelenskyy, Ukraine's Battle for Democracy, and What It Means for the World (Hardcover)

When Ukrainian journalist Iuliia Mendel got the call she had been hired to work for President Volodymyr Zelenskyy, she had no idea what was to come.

In this frank and moving inside account, Zelenskyy’s former press secretary tells the story of his improbable rise from popular comedian to the president of Ukraine. Mendel had a front row seat to many of the key events preceding the 2022 Russian invasion. From attending meetings between Zelenskyy and Putin and other European leaders, visiting the front lines in Donbas, to fielding press inquiries after the infamous phone calls between Donald Trump and Zelenskyy that led to Trump’s first impeachment.

Mendel saw firsthand Zelenskyy’s efforts to transform his country from a poor, backward Soviet state into a vibrant, prosperous European democracy. Mendel sheds light on the massive economic problems facing Ukraine and the entrenched corrupt oligarchs in league with Russia. She witnessed the Kremlin’s repeated attacks to discredit Zelenskyy through disinformation and an army of bots and trolls.

Woven into her account are details about her own life as a member of Zelenskyy’s new Ukraine. Written with the sound of Russian bombs and exploding shells in the background, Mendel details life lived under Russian siege in 2022. She says goodbye to her fiancé who joins the front lines, like so many other Ukrainian men. Throughout this story of Zelenskyy, Ukraine, and its extraordinary people, Iuliia Mendel reminds us of the paramount importance of truth and human values, especially in these darkest of times.
Iuliia Mendel is a Ukrainian journalist who served as press secretary and spokesperson for Volodymyr Zelenskyy, President of Ukraine, from 2019 until 2021. Mendel has more than fourteen years of journalism experience on TV and in print media and her writing has appeared in The New York Times, The Washington Post, VICE, Politico Europe, and many more. Follow her on Twitter @IuliiaMendel. The Fight of Our Lives is her first book.
"Moving.... [Mendel] helps demystify the dictator [Vladimir Putin] whom the Western media has long portrayed as having the cunning and wit of a fearless Bond villain... Her reflections on her relationship with the Ukrainian language at a time when Ukraine’s cultural ties to Russia have been all but severed are also extremely important to the cultural discourse. —The Washington Post

“By sharing her own story, Iuliia Mendel offers a powerful window into the soul of modern Ukraine. The Fight of Our Lives brings you inside a generation raised in transformation and provides vital context around Putin’s war on Ukraine. Her journey and her nation’s will move you and push you to learn more.” —Gayle Tzemach Lemmon, New York Times bestselling author of The Daughters of Kobani

“Iuliia Mendel’s book reminds us that war is not only about machines and destruction—it is also about people and ideas. The Fight of Our Lives shows us how Ukraine’s fight for freedom is our fight—humanity’s fight against tyranny.” —Kurt Volker, former United States ambassador to NATO

“In earnest and perceptive prose, Mendel’s The Fight of Our Lives tells the gripping story of Ukraine’s determined coming-of-age amid the most ghastly of circumstances.” —Marci Shore, associate professor of history at Yale University and author of The Ukrainian Night: An Intimate History of Revolution

“Who is Mr. Zelenskyy? Few people who write about the Ukrainian president and his surprising meteoric rise, first to the top of Ukrainian politics and then to the status of America’s most popular foreign leader, know him as well as Iuliia Mendel. In this book she shares with the world her personal story as the first press secretary of Mr. Zelenskyy and the story of the president and the country he leads. This is an essential read for anyone who wants to understand Ukraine of today and the values it fights for.” —Serhii Plokhy, Mykhailo S. Hrushevs'kyi Professor of Ukrainian History, Harvard University, and author of The Gates of Europe: A History of Ukraine and Atoms and Ashes: A Global History of Nuclear Disasters

"Iuliia Mendel's extraordinary story shows us her Ukraine, a young country that chose progress with President Zelenskyy’s transformative election but now finds itself under attack in Vladimir Putin's war on democracy."
—Ivan Mikloš, Slovakian economist and politician, former minister of finance of Slovakia

"A spirited account of history in the making" —Publishers Weekly

“A closely observed [and] nuanced portrait of a leader in a time of crisis who has definitely risen to the occasion.” —Kirkus