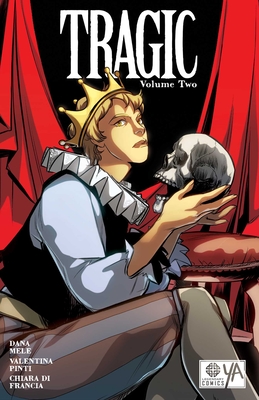 What was the question? With her head spinning and the ghost of her father continuing to haunt her, Harper’s list of murder suspects grows as she grapples with new revelations about her family. With Talia, Holden, and now Liam by her side, Harper must face the unthinkable as she delves further into the mystery of who killed her father, with the suspects all around her… and closing in.

Can Harper maintain her grip on reality long enough to see her father’s murderer brought to justice? And can reigniting her off-again-on-again relationship with Talia help her regain the sanity she needs to navigate the dangerous secrets that surround her? As Harper's story enters its final act, all the players take to the stage to perform their fated roles before they take their final bow.
Dana Mele is a Pushcart Prize–nominated writer based in upstate New York. A former bookseller and lover of pomegranates, Dana is the author of the YA thrillers People Like Us and Summer’s Edge. Tragic is Dana’s debut graphic novel. Follow Dana on Twitter at @danamelebooks and Instagram at @danammele.

Valentina is an Italian comic book artist and illustrator who studied in Italy at N.I.D. (New Istitute of Design) and the Academy of Fine Art in Perugia. She started publishing in 2013 and since then she has worked with a big number of Italian publishers. She has also collaborated with publishers such as Petit-à-Petit in France, South East Comics in Holland, Space Between Entertainment, BOOM!Studios and ScoutComics in the U.S., and Rebellion Comics in England. At the moment, apart from collaborating with Legendary Comics, she is hard at work with France's Editions Soleil.

Chiara Di Francia (1984 – Turin, Italy) has been working as an illustrator and comic artist since 2010. She illustrated books for Hachette Livre, Sigil Entertainment Group, Yil Editions. In 2020, she drew a volume of the “Mary Shelley Presents” series (Kymera Press), which won a Bram Stoker Award for Superior Achievement in a Graphic Novel. Since 2018, she has been collaborating with Arancia Studio as an illustrator and color artist, working for the French market (Jungle, Dupuis, Les Humanoïdes Associés and many more), then landing on the US market. She’s currently coloring “Red Sonja by Mirka Andolfo” and “Red Sitha” (Dynamite Entertainment).