Julian Assange in His Own Words (Paperback) 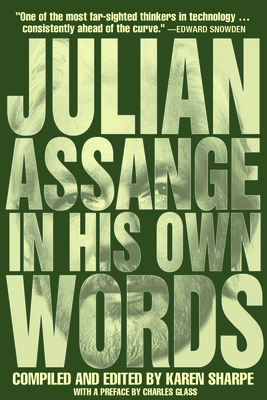 Julian Assange in His Own Words (Paperback)

The WikiLeaks publisher and free speech campaigner Julian Assange has, since April 2019, been remanded at a maximum security prison in London facing extradition to the United States over WikiLeaks' groundbreaking 2010 publications. Now, in this crisp anthology, Assange's voice emerges - erudite, analytic and prophetic.

Julian Assange In His Own Words provides a highly accessible survey of Assange's philosophy and politics, conveying his views on how governments, corporations, intelligence agencies and the media function. As well as addressing the significance of the vast trove of leaked documents published by WikiLeaks, Assange draws on a polymathic intelligence to range freely over quantum physics, Greek mythology, macroeconomics, modern literature, and empires old and new.

Drawing on his insights as the world's most famous free speech activist Assange invites us to ask further questions about how power operates in a world increasingly dominated by a ubiquitous internet.

Assange may be gagged, but in these pages his words run free, providing both an exhortation to fight for a better world and an inspiration when doing so.

Julian Assange is the founder and publisher of WikiLeaks and the author of When Google Met WikiLeaks (OR Books, 2014) and Cypherpunks: Freedom and the Future of the Internet (OR Books, 2012). Julian has won many awards for his journalism including the Amnesty International UK Media Award, Economist Award, Martha Gellhorn Prize for Journalism, Sydney Peace Foundation Prize, Walkley Award and many more. Articles by Julian Assange have been published in the New York Times, Washington Post, Newsweek and the Guardian. Nominated for the Nobel peace prize on numerous occasions his work as a journalist and publisher, and as a campaigner for freedom of expression, has been recognized at the highest level. Julian is currently facing a 175 year sentence if extradited to the US for his work as a publisher.