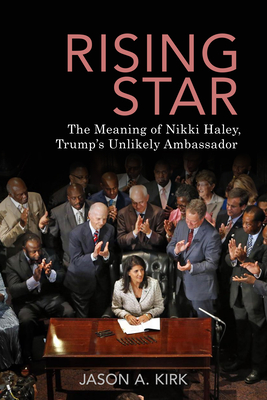 By Jason A. Kirk


Usually Arrives in Store in 1-5 Days
Nikki Haley has been an emerging force in American politics, her star power burnished over a decade that has seen her move from the national spotlight to the global stage. In Rising Star, political scientist Jason A. Kirk analyzes her ascendance in the Republican Party, from her governorship of South Carolina—during which she faced extraordinary challenges in a state reckoning with tragedy, race, and its own history—to her elevated profile as Donald Trump’s ambassador to the United Nations, where, as the daughter of immigrants and a woman of color, she became the face of his America First policy to the world. In considering a wide range of perspectives, Kirk illuminates how the combination of Haley’s political talents and her identity as an Indian American, Christian, southern woman has made her an unlikely bridge between the Trump years and the GOP’s embattled path forward.
Jason A. Kirk is professor of political science at Elon University. His previous book is India and the World Bank: The Politics of Aid and Influence.
“In Rising Star, Jason A. Kirk traces Nikki Haley’s career as an unanticipated enigma in American politics—a first-generation Indian American who assumed the governorship of a state still brandishing the Confederate flag upon her inauguration, a state that has repeatedly ranked at the bottom for female representation in public office. Kirk interrogates Haley as a key political figure, as both a product of her circumstances and an apt representation of larger dynamics at play. This impressive analysis of perhaps the most influential conservative woman of color of our time is an essential reference for scholars and politicos alike.”
—Laura Merrifield Wilson, University of Indianapolis