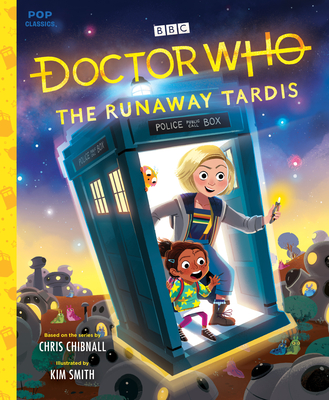 This is book number 8 in the Pop Classics series.

Join the Doctor and her smallest companion on a madcap adventure through time and space! The beloved sci-fi TV series is now a charming picture book, perfect for Doctor Who fans of all ages.

Unable to make friends at her new school, Lizzie packs a bag and runs away. After accidentally stowing away in the TARDIS, she meets the Doctor, a mysterious woman who claims to be a time-traveling space alien. When the TARDIS malfunctions, Lizzie and the Doctor are sent catapulting through time and space, visiting the pyramids, the dinosaurs, an alien planet, and more. Along the way, Lizzie learns that making new friends isn’t so hard after all . . . but will she ever be able to get back home? Featuring Jodie Whittaker’s Thirteenth Doctor and an adorable new alien species, this sweet storybook is a must-have for Whovians everywhere, young and old alike.
Chris Chibnall is a television writer and producer. He is the showrunner and head writer of Doctor Who, beginning with the eleventh series. He was also producer and head writer of the first two series of the spinoff show Torchwood.

Kim Smith is the illustrator behind the Quirk Books Pop Classics series, including Home Alone, Home Alone 2, The X-Files: Earth Children Are Weird, E.T. the Extra-Terrestrial, Back to the Future, Buffy the Vampire Slayer, The Karate Kid, and Doctor Who: The Runaway TARDIS. She has illustrated several other children’s books, including The Great Puppy Invasion (Houghton Mifflin Harcourt, 2017), Builder Brothers: Big Plans (HarperCollins, 2018), and Boxitects (Clarion Books, 2020), her author/illustrator debut. Kim lives in Calgary, Alberta with her dog, Whisky, and husband, Eric. Visit her online at kimillustration.com.
A Summer 2020 Kids' Indie Next Great Read
An Amazon Best Book of the Month: Ages 6-8

“A great way to introduce the tiniest Whovians to the series and thrill those of us who are still kids at heart."—Nerdist

“A cute introduction into the world of Doctor Who for the children in your life. With bright, fun cartoon illustrations, it is something that everyone can enjoy flipping through."—Markie Rustad, Ballast Book Company, Bremerton, WA

Praise for other books in the Pop Classics series:
“Thanks to the delightful illustrations of Kim Smith, families can bond over the lovable alien and his friendship with Elliot in book form.”—Jami Ganz, Entertainment Weekly, on E.T. the Extra-Terrestrial

“I was quickly won over by the charm of the writing and the awesome illustrations. Kim Smith's drawings have a distinctive style that imbues life into every single page.”—Sweety High, on Buffy the Vampire Slayer

“A lovely trip down memory lane that you can share with your little ones.”—Neatorama, on Back to the Future

“Smith’s art is excellent. . . . Her illustrations do a terrific job summing up the key moments of the movie, creating a rich picture of what happens in the film in only 40 pages.”—Comics Worth Reading, on The Karate Kid

“Kids will delight in the spooky-but goofy story and the surprise at the end, and parents will chuckle at this new take on an old favorite.”—GeekDad, on The X-Files: Earth Children Are Weird

“Home Alone: The Classic Illustrated Storybook offers all the fun of the original movie in a darling hardcover package whose read-aloud story teaches lessons about responsibility and the importance of family.”—Pop Culture Insider, on Home Alone