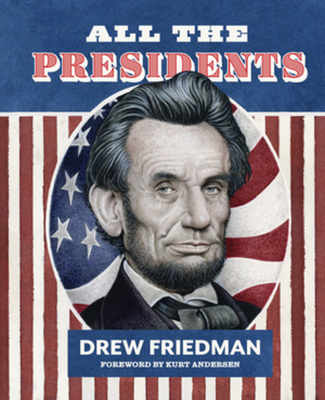 By Drew Friedman, Kurt Andersen (Foreword by)
$24.99
On Our Shelves Now

The celebrated satirical portraitist renders all 44 United States presidents; this book of illustrations also features a foreword by Kurt Andersen, the author and host of public radio's Studio 360.

All The Presidents is created by the caricaturist of the Barack Obama/George Washington mash-up inauguration cover for The New Yorker in 2009. It features everyone from George Washington to Donald Trump, accompanied by presidential factoids. It includes a foreword by Kurt Andersen, the author and host of public radio's Studio 360, and Friedman's two-page comic strip introduction, "Drawn to Presidents."

Drew Friedman's work has appeared in The New York Times, Mad, New Yorker, Rolling Stone, and many other magazines. He resides in Pennsylvania with his wife and collaborator, Kathy Bidus, and their two beagles.

KURT ANDERSEN is a novelist (Heyday, Turn of the Century) and journalist (Studio 360).

Drew Friedman's All the Presidents doesn’t just bring the Presidents to life, it makes them human. And maybe even more than human. Courtesy of Friedman, the Presidents are now characters some filled with charisma while others brim with faults and frailties. From Trump's self-satisfaction and TR's irascibility to John Quincy Adam's persnicketiness and Woodrow Wilson's choirmaster demeanor, you will stare at these portraits for hours and get to know these commanders-in-chief in an all new way.

Everyone talks about 'warts and all' portraits of presidents and world leaders but this book is LITERALLY that. Mesmerizing.
— Patton Oswalt

Somehow, Drew Friedman’s mastery manages to both humanize and satirize every member of this most exclusive club of U.S. presidents. Blemishes, moles, and errant hairs are like stars in his sky.
— Jake Tapper

Drew Friedman, he’s one of the best. He’s got skill, he’s got humor. I love his stuff.
— R. Crumb

The great Drew Friedman took time to draw a portrait of every U.S. President. His work always blows me away.
— BoingBoing