Sonic the Hedgehog, Vol. 8: Out of the Blue (Paperback) 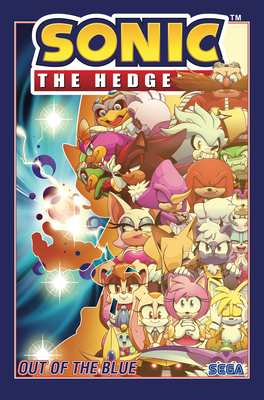 Sonic the Hedgehog, Vol. 8: Out of the Blue (Paperback)


Usually Arrives in Store in 1-5 Days
Team Sonic defeated the Metal Virus, but things are far from back to normal. What have they lost, and which villains will seize the opportunity to strike?

First, "Untold Tales of the Metal Virus!" As Dr. Eggman's technological plague sweeps the world, some of Sonic's greatest allies and most sinister foes must face the threat alone! Witness wrenching tragedies and surprising acts of bravery in six stories from the darkest days of the virus.

Then, in the aftermath of the Metal Virus Saga, the world has changed. Heroes and villains plan for the future as reconstruction begins. But one hero remains missing, even as Dr. Eggman launches a new assault, determined to take down his enemies once and for all. Faced with new challenges and the legacy of a friend, can the Resistance prevail without the full support of their allies?

Collects the Sonic The Hedgehog 2020 Annual and issues #30-32 of the ongoing comic series.
Ian Flynn is a freelance writer for multiple forms of media. He's also "that Sonic guy" as his portfolio of Sonic the Hedgehog work makes abundantly clear. He was born and raised in Charlotte, North Carolina and is currently based out of Toronto, Ontario, with easy business ties to both sides of the border. In addition to writing, he's part of a podcast/gaming channel series called the BumbleKast.
"High-quality all-ages entertainment." –Weird Science