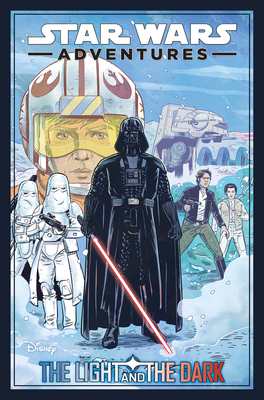 
On Our Shelves Now
Brand-new middle-grade stories featuring all your favorite characters from the far reaches of the Star Wars galaxy, spanning the entire Skywalker Saga and beyond!

Three oversized stories featuring Rey, Finn, and Poe; Qui-Gon Jinn and the mighty Wookies of Kashyyk; and Padmé and Anakin; plus half a dozen short stories including tales of villainy starring Kylo Ren and Darth Vader himself!

First, Poe and Finn take Rey to a remote planet to continue her Jedi training. But they're surprised to find that the First Order's reach extends far and wide. Then, Qui-Gon joins the Wookiees of Kashyyyk for a special Life Day celebration! And after that, Padmé and Anakin face a major predicament as they struggle to navigate the politics of the Republic!

Meanwhile, on the Dark Side, Kylo Ren faces the difficulties of leadership and the politics of fear. And, following the siege of Hoth, Darth Vader explores the secrets of the abandoned Rebel base. All this, and new stories of dastardly exploits by Grand Moff Tarkin, Darth Maul, Tobias Beckett and Val, and the sinister Nihil.

Katie Cook is a comic artist and writer that hails from the mitten state (as in Michigan, not that she is in the state of being a mitten). She is the creator of the comic Gronk: A Monster's Story as well as working on IDW's smash-hit My Little Pony: Friendship is Magic. She has also done work for Marvel, DC, Disney, LucasFilm, Fraggle Rock, and many other companies. She also wrote some books about mean cats that people seem to like.

Nick Brokenshire is a writer/artist for IDW's Star Wars Adventures, including stories that feature ASAJJ VENTRESS, IG-88 and MAX REBO. Nick is also co-creator/artist/colorist of The Once and Future Queen (Dark Horse) and has contributed to Heavy Metal, 2000AD, Judge Dredd (IDW) and Robotech (Titan). This year he will finish drawing a 200 page graphic novel called She's Not There, written by Ellis Bojar. Then he will sleep.