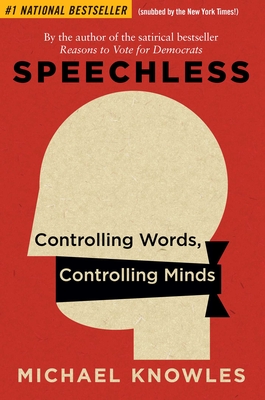 “Every single American needs to read Michael Knowles’s Speechless. I don’t mean ‘read it eventually.’ I mean: stop what you’re doing and pick up this book.”

"The most important book on free speech in decades—read it!” —SENATOR TED CRUZ

A New Strategy: We Win, They Lose

The Culture War is over, and the culture lost.

The Left’s assault on liberty, virtue, decency, the Republic of the Founders, and Western civilization has succeeded.

You can no longer keep your social media account—or your job—and acknowledge truths such as: Washington, Jefferson, and Columbus were great men. Schools and libraries should not coach children in sexual deviance. Men don’t have uteruses.

How did we get to this point?

Michael Knowles of The Daily Wire exposes and diagnosis the losing strategy we have fallen for and shows how we can change course—and start winning.

Read Speechless: Controlling Words, Controlling Minds if you want to learn how to take the fight to the enemy.

MICHAEL KNOWLES is the celebrated host of The Daily Wire’s The Michael Knowles Show and PragerU’s The Book Club and the #1 national bestselling author of Reasons to Vote for Democrats: A Comprehensive Guide. Speechless is his first book to contain words.

“Every single American needs to read Michael Knowles’s Speechless. I don’t mean ‘read it eventually.’ I mean: stop what you’re doing and pick up this book.”

—CANDACE OWENS, bestselling author of Blackout, founder of BLEXIT, and host of Candace

“Michael Knowles is a rare combination: the conservative who understands the roots of his opponents’ thought, and the fighter who understands the necessity for tactical aggression.” —BEN SHAPIRO, #1 bestselling author and host of The Ben Shapiro Show

“This book is a howitzer in the fight against the totalitarians. . ..” —DAN BONGINO, bestselling author and host of The Dan Bongino Show

“Magnificent. . .. like nothing you’ve ever read. . .. Tough love for hapless right-wingers forfeiting our culture to the radical Left.” —ANN COULTER, political commentator and bestselling author of ¡Adios, America!

“This book is a must-read for anyone who hopes to preserve our culture.” —MIKE POMPEO, former U.S. secretary of state

“This book is a must-read for anyone wanting a diagnosis on how American culture and politics became so ill.” —ANDY NGÔ, journalist and bestselling author of Unmasked

“Knowles has written an insightful and gripping deconstruction of the mind-prison called political correctness. . .. This is a must-read.” —ANDREW KLAVAN, Edgar Award-winning and bestselling author and host of The Andrew Klavan Show