The Watercolor Road | Painting and Writing through America's South (Hardcover) 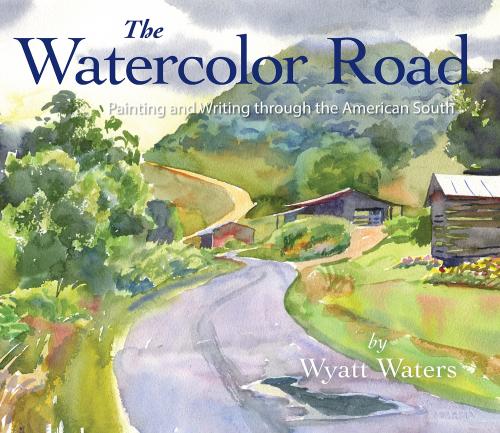 The Watercolor Road | Painting and Writing through America's South (Hardcover)


On Our Shelves Now
Experience the American South through the expressive paintings and musings of renowned master watercolorist, Wyatt Waters. His rambling and wandering through the southern trail deliver an impressive collection of 133 paintings, 21 essays, and an array of adages that depicts both the South and his relentless trek to be a better painter as a mindset rather than a destination.

The Watercolor Road captures the artist’s longing ambition to explore and present this place he calls home in plein air watercolor. Pulling a 16-foot Casita travel trailer behind his Pastormobile, Wyatt roams the rural and urban, country roads and highways, oceans and forests, BBQ joints and local diners — expressing his visceral connection to each locale with his vivid images. His pictorial explorations span from the Arkansas plateaus to the Louisiana bayous, the Blue Ridge Mountains to the low country marshes of South Carolina, across southern farmlands and down to the balmy Florida Keys — with all points in between.

Having long contemplated his feelings and observations on painting and living through his writings — in this book, Wyatt shares the many truths he has learned along the way and how he applies them to his art and to his life.

The Watercolor Road will appeal to aficionados of southern culture as well as those who enjoy the act of painting and desire a deeper understanding of the “whys" of painting more so than the “how-tos”.

A prolific painter, renowned watercolorist Wyatt Waters has painted about as long as he has been alive — starting with lessons before he was school-aged until earning a master’s degree in art. In his unrelenting quest of becoming a better painter, Wyatt draws on the influences of masters such as John Singer-Sargent, Edward Hopper, and William Hollingsworth. Waters works solely on location – preferring the challenges that both plein air and watercolor present. His philosophy is “if it is interesting to see, it can be a painting.” This approach has led to the publication of seven very successful books including Another Coat of Paint, Painting Home, An Oxford Sketchbook, and in collaboration with Mississippi restauranteur, Robert St. John, A Southern Palate, Southern Seasons, An Italian Palate, and A Mississippi Palate. Additionally, Wyatt can be found on Mississippi Public Broadcasting’s television series, Palate to Palette, with St. John — a traveling culinary and art series set in Italy and Mississippi. He has also illustrated covers and interiors for 17 other books through various publishers. A recipient of the Governor’s Award for Excellence in the Arts, the Mississippi Institute for Arts and Letters (An Oxford Sketchbook), and the Mississippi Library Association’s Special Award (A Southern Palate), Wyatt and his work have been featured in numerous magazines such as Plein Air, American Artist, American Watercolor, and Arts & Antiques. Ever the teacher, Wyatt conducts workshops throughout the Southeast, as well as in Italy and the Caribbean. He served two years as a faculty member for Plein Air South — an annual gathering of regional plein air organizations and painting groups. Wyatt has had numerous solo exhibitions at museums such as MS Museum of Art, Lauren Rogers Museum of Art, Meridian Museum of Art, and Jackson Municipal Gallery. His work can be found in both corporate and private collections, including those of two former presidents and several U.S. senators. Open since 1999, Water’s eponymous gallery is located on the brick streets of the Olde Towne business district in Clinton, Mississippi and was recently recognized as Best Gallery in Mississippi by Mississippi Magazine. The Gallery features the catalogue of his original work and giclée prints. Following Wyatt’s belief that art is for everyone, the Gallery houses a gift shop where a variety of affordable imprinted gift items can be found, including prints, books, stationary, and apparel. When they are not traveling, Wyatt and his wife, Kristi, reside in Clinton, just around the corner from the Gallery. Visit wyattwaters.com to view more of Wyatt’s work and the online gallery and store.