The Beast: Riding the Rails and Dodging Narcos on the Migrant Trail (Paperback) 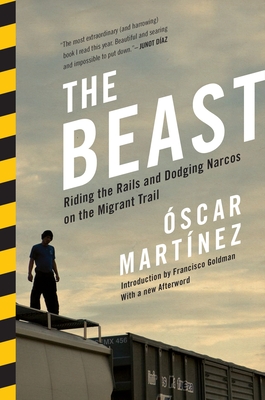 The Beast: Riding the Rails and Dodging Narcos on the Migrant Trail (Paperback)


Usually Arrives in Store in 1-5 Days
ONE OF THE BEST BOOKS OF THE YEAR, The Economist and The Financial Times

One day a few years ago, 300 migrants were kidnapped between the remote desert towns of Altar, Mexico, and Sasabe, Arizona. A local priest got 120 released, many with broken ankles and other marks of abuse, but the rest vanished. Óscar Martínez, a young writer from El Salvador, was in Altar soon after the abduction, and his account of the migrant disappearances is only one of the harrowing stories he garnered from two years spent traveling up and down the migrant trail from Central America and across the US border. More than a quarter of a million Central Americans make this increasingly dangerous journey each year, and each year as many as 20,000 of them are kidnapped.

Martínez writes in powerful, unforgettable prose about clinging to the tops of freight trains; finding respite, work and hardship in shelters and brothels; and riding shotgun with the border patrol. Illustrated with stunning full-color photographs, The Beast is the first book to shed light on the harsh new reality of the migrant trail in the age of the narcotraficantes.
Óscar Martínez writes for ElFaro.net, the first online newspaper in Latin America. The original edition of his book Los migrantes que no importan was published in 2010 by Icaria and El Faro and a second edition by Mexico’s sur+ Ediciones in 2012. Martínez is currently writing chronicles and articles for El Faro’s project, Sala Negra, investigating gang violence in Latin America. In 2008, Martínez won the Fernando Benítez National Journalism Prize in Mexico, and in 2009, he was awarded the Human Rights Prize at the José Simeón Cañas Central American University in El Salvador.
NAMED ONE OF THE BEST BOOKS OF THE YEAR BY The Economist & The Financial Times

“Harrowing … The graceful, incisive writing lifts The Beast from being merely an impressive feat of reportage into the realm of literature. Mr. Martínez has produced something that is an honorable successor to enduring works like George Orwell’s The Road to Wigan Pier or Jacob Riis’s How the Other Half Lives.”
—New York Times

“The most extraordinary (and harrowing) book I read this year. Beautiful and searing and impossible to put down.”
—Junot Díaz

“The world that Oscar Martínez, a Salvadoran journalist, set out to report on five years ago is so violent, depraved and hellish, you can hardly believe he survived to tell the tale... rugged prose, beautifully translated.”
—The Economist

“Martínez is a powerful storyteller and his approach to investigative journalism is closer to anthropological immersion: He walks with migrants through bloody forests, eats with them at spartan shelters, and rides with them atop speeding trains.”
—Columbia Journalism Review

“The Beast, like so many great books, lands on you with a revelatory frisson, the arrival of a story we didn’t know we were waiting to hear.”
—Los Angeles Review of Books

“… Martínez’s debut is the hard-won result of immersive journalism.”
—Kirkus

"This searing account of the hardships suffered by Central American migrants headed through Mexico to the United States comes from true shoe-leather reporting."
—Publisher's Weekly

“To understand the dramatic realities faced by the migrants who flee northwards to find work in the United States, Óscar Martínez literally jumped trains and dodged killers. He deserves praise not only for his efforts, and for what he writes about, but because he writes so very well.”
—Jon Lee Anderson, staff reporter for the New Yorker

“A heartbreaking book about the world’s most invisible people. A revelatory work of love and hair-raising courage.”
—Alma Guillermoprieto, Latin America correspondent for the New York Review of Books, author of Dancing with Cuba

“Óscar Martínez is a journalist of uncommon bravery and a writer of prodigious talent. The Beast is a powerful, necessary book, one of the finest pieces of journalism to emerge from Latin America in years.”
—Daniel Alarcón, author of At Night We Walk in Circles

“Forget the rhetoric, the politics, and the propaganda. The Beast is the real story of the drug war.”
—Lithub