Life and Death on the Eastern Front: Rare Colour Photographs from the Second World War (Hardcover) 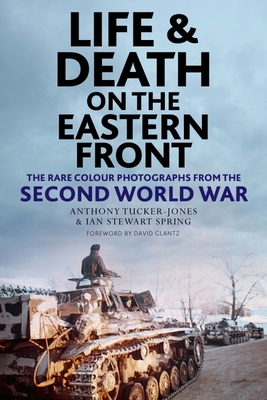 Life and Death on the Eastern Front: Rare Colour Photographs from the Second World War (Hardcover)


Backordered -- Email or Call for Availability
This incredible visual record of life and death along the Eastern Front features more than 250 images from the the PIXPAST Archive, a collection of more than 32,000 original color photographs taken between 1936 and 1946.

Collated into three parts and organized thematically, the book begins with images of the ground war, including Hitler's invasion of the Soviet Union and the tanks, vehicles, weaponry and infantry on both sides. Moving into the war in the skies, the images depict aircraft in flight and on the ground, the bombers, fighters, Luftwaffe personnel and the destruction wrought from battle. And finally, the images take us behind the lines, to the prisoners of war, partisans, medics, the daily lives and leisure activities of soldiers and civilians along the front and the impact of the harsh Russian winter.

Accompanied by text by renowned author and commentator Anthony Tucker-Jones, these images offer a rare, often surprising insight into the realities of the Second World War and people caught up in it, in vivid color detail.