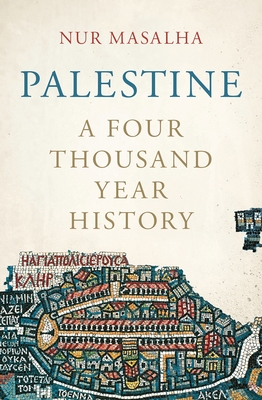 
Backordered -- Email or Call for Availability
This rich and magisterial work traces Palestine’s millennia-old heritage, uncovering cultures and societies of astounding depth and complexity that stretch back to the very beginnings of recorded history. Starting with the earliest references in Egyptian and Assyrian texts, Nur Masalha explores how Palestine and its Palestinian identity have evolved over thousands of years, from the Bronze Age to the present day. Drawing on a rich body of sources and the latest archaeological evidence, Masalha shows how Palestine’s multicultural past has been distorted and mythologized by Biblical lore and the Israeli-Palestinian conflict. In the process, Masalha reveals that the concept of Palestine, contrary to accepted belief, is not a modern invention or one constructed in opposition to Israel, but rooted firmly in ancient past. Palestine represents the authoritative account of the country's history.
Nur Masalha is a Palestinian historian and a research associate at SOAS University of London. He is editor of the Journal of Holy Land and Palestine Studies. His books include Expulsion of the Palestinians, A Land without a People, The Politics of Denial, The Bible and Zionism, and The Palestine Nakba, the latter two from Zed Books.
“One hopes that this book will be widely read. . . . It reflects decades of research and a close reading in several languages, ancient and modern, of an extraordinary number of sources.”
— Journal of Palestine Studies

“A significant contribution to the restoration of the history of ancient Palestine, written by a prolific indigenous historian of international repute. Brilliantly explicating the relationship between history and colonial ideology in Palestine, with this book Masalha puts Palestinian history back on track.”
— Hamdan Taha, archaeologist and former deputy minister for tourism and antiquities, Palestine

“An amazing book, long overdue. A tour de force which demystifies the distortions and fabrications around Palestine and the people living in it.”
— Ilan Pappé, author of The Ethnic Cleansing of Palestine

“Masalha’s meticulous and multifaceted coverage of the history of Palestine from the late Bronze age to modern times is essential reading for all who hope to understand its people’s irrepressible struggle against occupation and exile.”
— Rosemary Sayigh, author of The Palestinians: From Peasants to Revolutionaries

“A masterpiece of history writing. It serves to set the record straight, methodically and rigorously debunking the myth that Palestine is a new concept.”
— Mazin Qumsiyeh, founder and director of the Palestine Museum of Natural History

“This book by Nur Masalha is the fullest and richest text he has produced to date, bringing together his decades of work as a historian to produce a master narrative on Palestine.”
— Haim Bresheeth, SOAS University of London

“This erudite, comprehensive study of Palestine explodes many myths. Essential reading for a proper understanding of the efforts to deny the deep historical rootedness of this name, and of its indigenous people.”
— Rashid Khalidi, Columbia University

“A work of broad and impressive scholarship. It fills a critical gap in our knowledge of Palestinian history and provides a long overdue corrective to traditional histories.”
— Ghada Karmi, author of Return: A Palestinian Memoir

“It is the first true history of Palestine, and should be read by anyone with an interest in the Middle East.”
— Karl Sabbagh, author of Palestine: A Personal History