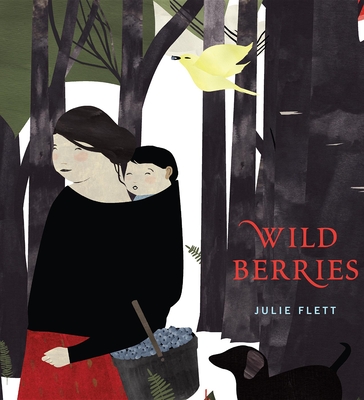 Tch, tch, sh, sh, tup, tup.
Spend the day picking wild blueberries with Clarence and his grandmother. Meet ant, spider, and fox in a beautiful woodland andscape, the ancestral home of author and illustrator Julie Flett. This book is written in both Enlglish and Cree, in particular the n-dialect, also known as Swampy Cree from the Cumberland House area. Wild Berries is also available in the n-dialect Cree, from the Cross Lake, Norway House area, published by Simply Read Books.
Julie Flett is a Vancouver-based Metis and Cree artist and illustrator who incorporates photography, drawing, and painting into her practice. Born in Toronto, Julie has spent much of the last two decades in Western Canada. She began her studies in textile design at the Alberta College of Art. Following two years of studio at the Emily Carr Institute of Art and Design, she completed a Fine Arts degree at Concordia University in 1997. Returning to Vancouver she worked as a coordinator for a visual communication program for First Nations and was involved with a range of advocacy and support work for women in Vancouver's Downtown East Side. Julie was the recipient of the Canadian Native Arts Foundation Visual Arts Acquisition Program in 1993, and was a finalist for two BC Book Prizes in the Christie Harris Illustrated Children's Literature Prize category for her illustration work on the book The Moccasins, authored by Earl Einarson (2004) and Zoe and the Fawn, authored by Catherine Jameson (2007). Zoe and the Fawn was awarded a Medal in the category of Multicultural Picture Book in the 2007 Moonbeam Children's Books Awards. Julie has a long-held interest in folk tales, trickster stories and picture books. Owls See Clearly at Night (2010, Simply Read Books), was nominated for the 2010 GG Awards, Children's Literature - Illustratiol, winner of the 2010 Elizabeth Mrazik-Cleaver Award, IBBY; First Nation Communities Read (FNCR) 2010 Nominated Title, 2010 Honorable Mention for the 2011 Amelia Frances Howard-Gibbon Award Shortlist; Winner of the 2011 Christie Harris Illustrated Children's Literature Prize, BC Book Prizes; and an Alcuin Society Book Design Awards Honor Book.