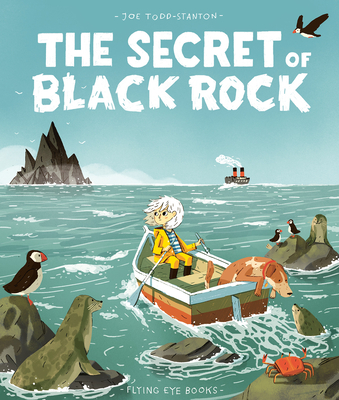 Erin loves living by the sea but longs to be a part of it. Ignoring the fear of others, she is determined to uncover the mystery that is Black Rock. A compelling story with enchanting illustrations. This is an adventure not to be missed.

Erin loves to lie on the jetty, looking for the weirdest fish in the sea—the weirder, the better! And she knows the best ones must be further out, where her mum won't let her go...

Out there in the deepest sea lies the Black Rock: a huge, dark and spiky mass that is said to destroy any boats that come near it! Can Erin uncover the truth behind this mysterious legend?

Joe Todd-Stanton grew up in Brighton and was taught to draw by his mother, who is also an illustrator. He studied at Bristol University, receiving a first class degree in Illustration.

Todd-Stanton’s tale is, at first glance, a deceptively simple tale of acceptance and bravery. However, he deftly infuses his narrative with quiet depth, including a positive ecological slant in which nature wins over machines, and portrays Erin’s single mother succeeding in a typically male-dominated profession. The illustrations are dazzling and vibrantly hued, the rich palette just right for the resplendent undersea scenes that adroitly float young readers’ sense of magic just under the surface of the mundane. A winner on many levels.
—Kirkus Reviews, STARRED REVIEW

The gentle environmental message takes on a kind of magic in Todd-Stanton’s pictures of Erin suspended in the ocean among incandescent jellyfish or facing down a monstrous, weaponised fishing fleet in the moonlight. A young artist to watch.
—The Guardian

A fairytale world is created that should enchant children as much as the old-fashioned illustrations that fit the story perfectly.
—Youth Services Book Review

The layers of ocean life and the benign Black Rock are beautifully rendered in this wonderfully tactile hardback, while the gently delivered environmental message adds a welcome real-life depth to the modern mythic tale.
—Irish Times

An original picture book story that is superbly illustrated from cover to cover, Joe Todd-Stanton's "The Secret of Black Rock" is a compelling and entertaining read for children ages 5 to 8, making it an extraordinary and highly recommended addition to family, elementary school, and community library collections.
—Midwest Book Review

This is an exceptionally illustrated modern folk-tale […] You will love Erin and her large heart, courage, sense of adventure, and ability to stand up for what she believes in!
—A Story A Day

This book is truly an amazing read! […] The illustration is magnificent!
—How Useful It Is

"This book has several great messages within the covers. First, how cool is it that Erin's mother is a fisherwoman with her own boat?? Such a small and awesome way to subvert gender stereotyping.  Second is the message of environmental conservation and bravely standing up for what you believe in.  Erin feels passionately about saving Black Rock and all of the critters that call it home, and she’s not afraid to take direct action."
—The Tiny Activist