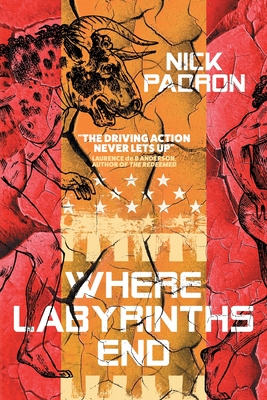 They kidnapped the wrong girl.

During the famed running of the bulls in Pamplona, Symphony Messina, the daughter of a Mafia capo is visiting Spain with her fianc , Miguel Angel, a young heir to a Spanish-Basque fortune. While Symphony waits for Miguel to run with the bulls, Basque terrorists watch her every move.

In a lightning operation, Miguel is abducted and Symphony is held a secret prisoner. Back in New Jersey, Symphony's parents have no idea where she is. Was she kidnapped too? Is she alive?

Unable to turn to the authorities, Joey Messina, her mobster father, turns to his crime family don, who recruits New York's most vicious hitman to track down her abductors. The bloodbath that ensues sets off a dog-eat-dog match that threatens to leave no one involved alive.

Will Tess and Zeus be able to rescue Symphony after she is abducted yet again by Minot, one of her crispiest kidnappers?

More than a clash between Euro-terrorists and American gangsters, Where Labyrinths End explores the volatile mixture of emotions that pull average men and women to shocking choices. Readers who appreciate Robert Ludlum's fast-paced action and the absorbing prose of Don DeLillo's political thrillers will enjoy the blend of multiple plot twists and intense storytelling.