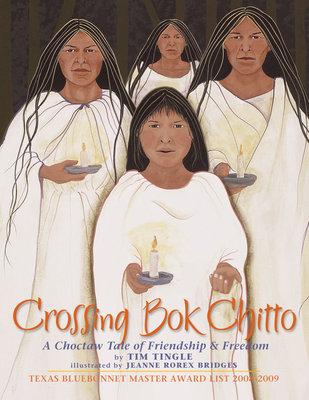 In this American Indian Youth Literature Award-winning story of cross-cultural friendship, a family of enslaved people and a Choctaw tribe work together on a daring escape.

Martha Tom, a young Choctaw girl, knows better than to cross Bok Chitto, but one day--in search of blackberries--she disobeys her mother and finds herself on the other side. When a tall enslaved man discovers Martha Tom, a friendship begins between Martha Tom and the man's family, most particularly his young son, Little Mo. Soon afterwards, Little Mo's mother finds out that she is going to be sold. The situation seems hopeless, until Martha Tom teaches Little Mo's family how to walk on water to their freedom.

This original story was inspired by tales passed down through spoken word. Author notes in the backmatter offer a brief overview of Choctaw history and storytelling traditions, as well as the roots of the tale. Older readers will also enjoy the author's Stone River Crossing, a novel-length expansion of this book.

Tim Tingle is an Oklahoma Choctaw, an award-winning storyteller, and the author of more than twenty books for children, teenagers, and adults. His titles have been recognized by the American Indian Youth Literature Award four times and nominated for numerous state awards. He received his master's degree from the University of Oklahoma with a focus in American Indian Studies. Tingle lives in Texas. Visit his website at timtingle.com. Jeanne Rorex Bridges traces her heritage back to Cherokee ancestors. Her work is nationally known and has won many awards in Native American art shows, including the 2005 Best of Show at the Five Civilized Tribes Museum. Crossing Bok Chitto is her first children's book, for which she was named Oklahoma Illustrator of the Year in 2007. She lives in eastern Oklahoma, and you can find her website at rorexbridgesstudio.com.

"In a picture book that highlights rarely discussed intersections between Native Americans in the South and African Americans in bondage, a noted Choctaw storyteller and Cherokee artist join forces with stirring results… the story [has a] powerful impact on young readers." —Booklist, starred review

"Crossing Bok Chitto… tells a tale with a happier ending, but its journey is no less a departure from the narrative of American uplift. In literature for children, this is a lesson as old as the Grimms. But these realities cut deeper than any fantasy." —The New York Times

"Tingle is a performing storyteller, and his text has the rhythm and grace of that oral tradition. It will be easily and effectively read aloud. The paintings are dark and solemn, and the artist has done a wonderful job of depicting all of the characters as individuals, with many of them looking out of the page right at readers." —School Library Journal

"A moving and wholly original story about the intersection of cultures…Bridges creates mural-like paintings with a rock-solid spirituality and stripped-down graphic sensibility, the ideal match for the down-to-earth cadences and poetic drama of the text." —Publishers Weekly, starred review

"Crossing Bok Chitto is very highly recommended for all young readers as a celebration of diversity, acceptance, and unity in a remarkable production of expert authorship and invaluable illustrations." —Midwest Book Review, starred review

"A very moving story about friends helping each other and reveals a lesser-known part of American History: Native Americans helped runaway slaves...While, this is a picture book; it would make a wonderful read-aloud for middle elementary students." —Children's Literature